They lost, sure. But it was fun for a few minutes!

Ryan Vogelsong pitched well. That's all that matters. In a season of miserable, papercut-on-the-webbing-of-your-toes losses, recognize the losses with silver linings. It's good for your health.

When the Giants mounted a furious comeback and tied the game in the ninth, this comic popped in my head: 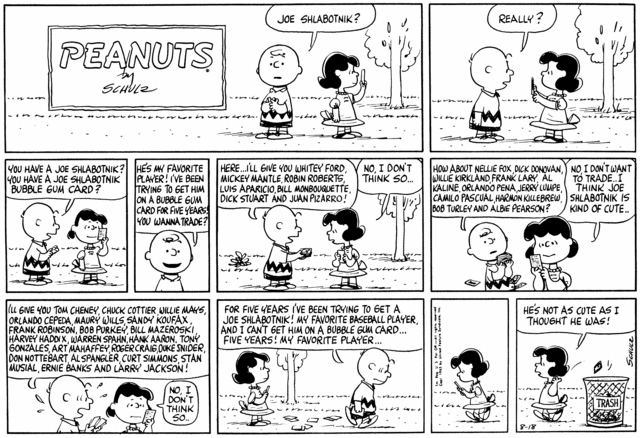 All Charlie Brown wants is the Shlabotnik card. Lucy has it, but she doesn't know what to do with it.

In this analogy, the Giants are Lucy. Selfish, selfish Lucy. What would they do with a walk-off win right now? Feel good for a few seconds before realizing they're behind the Cleveland Spiders in the standings? They'd just toss it in the trash like so many Shlabotnik cards.

But the Orioles needed that win so danged bad. They're still in the AL East race. They're most certainly in the wild-card races. Wild-cards race. Wilds-card races. A late-inning loss would have pantsed their soul.

Do you want to root for a team that would pull the football away at the last second? No. Wait, maybe. But pretend you don't.

It backfired, of course. Because that's how this season is going for the Giants. Davis is actually hitting lefties well this season -- as Bochy spits out his coffee and says, "What manner of wizard is this?" -- so it was a pretty silly move. But I feel like there needs to be a rulebook for Javier Lopez usage:

That's it. Those are the rules. So it stands that bypassing Adam Jones to get to Davis makes sense, but only if Bochy was playing for the 15th inning. As in, there's no reason to waste relievers in a situation where a 15-inning game was a legitimate possibility.

If Lopez pitched to Jones and was burned, everyone would jump on Bochy for that. You can see the dilemma that managers face in situations like that. The real answer is to have a better team.

Be better at baseball, Giants.

The correct answer was probably Santiago Casilla against Jones, but it's not like that's a super-sexy option, either.

No, I mean sexy as in "desirable,", but not ... look, forget it. Point is, there weren't a lot of good options because the Giants don't have a lot of good players.

Sergio Romo starting the inning? Now you're talking. But once that didn't happen, I'd still trust Lopez to get Davis out. It blew up in the Giants' face because of course it did. That's 2013 for you.

How the ninth-inning went: Leadoff single, walk, RBI single, hard-hit out, good AB that ended in a K, hard-hit out. One run.

The Aristocrats! Also, the 2013 Giants! But less tasteful.

Roger Kieschnick had a good at-bat before he couldn't put the ball in play. Other than the metal crocodile, Mrs. Benson, how were the bath salts? Wait, I mean, other than the play, Mrs. Lincoln ... whatever, you get the idea.

Brandon Belt update: .269/.349/.462 in a pitcher's park in a low-offense league. Probably the reason the Giants are bad, though. Just give it time. Really study the situation and look for faults. Maybe there's something hygiene-related to pick on.

That feeling when the cameras cut to center field on Davis's double, and Gregor Blanco was at Red's with a burger and an Anchor Steam, saying, "Aw, nuts" ...