I was going to make a Trouble with the Curve pun, but screw that terrible movie.

If you're like me, you've probably come to terms that Good Tim Lincecum ain't coming back through that front door any time soon. It's a depressing notion that Giants fans have had to process over the past couple of seasons. I'm pretty sure the cycle has been and will always be: depression, counseling, glimmers of "Timmy's back", hope, depression, more counseling, and acceptance. Crushing, brutal acceptance that Happy Timmy Day turned into something far more drab and depressing than we ever could have expected. Pitching is really hard. Baseball can be cruel. Book it, nerds.

What I'm trying to say that is that it's been pretty hard to watch the 2012-2013 version of Tim Lincecum, you guys.

When Lincecum debuted in the majors in 2007 he was known for two pitches: 1) a huge mid-90s fastball and 2) a pretty great curveball. When Lincecum was scouted and eventually drafted, all the reports raved on and on about those two pitches. The heater was fast; the curveball was sexy. Eventually, Lincecum developed the changeup that earned him two Cy Young Awards. And for awhile, Lincecum favored the change. Why not? It's the pitch that confounded National League hitters for years. Then, in 2011, came the slider. It was another quality pitch that subtracted from his curveball usage. According to Brooks Baseball, in 2007 Lincecum threw his curveball 17.16 percent of the time. That rate has dropped all the way to 9.65 percent this season*. He hasn't thrown it in the double-digits since 2010 (11.65 percent). As time's passed, he's thrown the curve less and less.

* This number is from my PFX database. Brooks classifies things differently than the MLB algorithm. So, it's common to have numbers that are off a little bit between the two. Still, I think the point stands.

So, what's the big deal with the curveball now? Arbitrary end points ahead, but since June 4th, Lincecum has posted the following pitching line: 12 GS, 77 IP, 27 ER, 3.39 ERA, 26.4 strikeout percent, 7.1 walk percent, .280 wOBA against. Over that time period, Lincecum has used his curveball more and more. And he's used it successfully.

Here's a line graph of rolling averages for Lincecum's curve usage and whiff rate on the pitch: 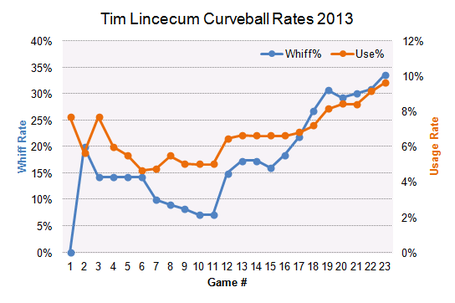 We can also do monthly splits:

This line graph might be a little confusing because it has two axes, but the trend over the last 12 starts is pretty apparent: he's throwing the curve more and batters are whiffing on the pitch more. In fact, Lincecum has thrown the curve at least 20 percent of the time in each of his last two starts -- 23.4 percent against Tampa Bay on August 3rd and 20.4 percent in yesterday's brilliant start against Milwaukee. It was the first time since these two games in 2010 that Lincecum had back-to-back outings while using the curve 20-plus percent.

So what's it all mean? 12 starts is still a small-ish sample. Baseball nerds can't get out of bed in the morning without saying "SSS" before their feet hit the floor, and it's probably somewhat true in this case. We're still talking about 77-some odd innings of pitching, which isn't even half of a normal season for a starting pitcher. However, I think we can also glean some positives from the last 12 starts. Lincecum has always had a good curveball. The development of his changeup and slider clearly pushed the pitch to the back of his arsenal. There's a good chance that if Lincecum succeeds going forward, it'll be as a pitcher that mixes in the curveball more. Endless articles have been penned on Lincecum's issues, so there's no need to rehash it here, but adding more wrinkles to your pitch selection -- as a guy with declining stuff -- clearly seems like a good thing to me.

If your curveball makes someone lose their helmet, it's a good curveball.

As funny as it sounds, it's possible that Lincecum still might be learning how to pitch without top-shelf velocity. If the end of this season teaches him some skills that he can use to be successful in 2014, then I'm for it. A craftier, curveballier Lincecum is probably a good thing for everyone. Maybe even the Giants, because the team is sure to extend a qualifying offer to Lincecum at end of this season. Consider the remainder of this season an experimental lab of what a successful Tim Lincecum might look like in the future.