Hunter Pence, the Giants, and a long-term contract

Share All sharing options for: Hunter Pence, the Giants, and a long-term contract

For the first time since 2008, the Giants were sellers at the deadline. They did nothing. It would have been nice if they could have found a Zach Wheeler or Zack Whaler to replace Zack Wheeler. But they didn't like the offers that were on the table, and they did nothing.

Brian Sabean: To be honest, I would give him up for Profar alone. And I'd throw in Jose Mijares.

Jon Daniels: That's close, but I think we'll counter offer with this: We'll take Pence off your hands if you offer to pay half of Elvis Andrus's salary without getting Andrus, an injured Lance Berkman, and whatever cat Berkman is holding in this picture. 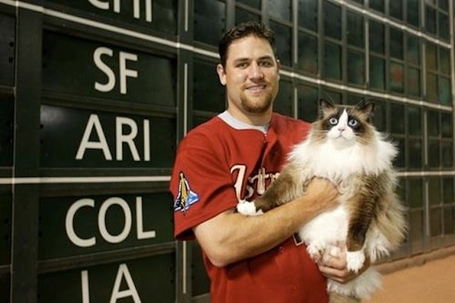 Daniels: If you toss in a guy like Mike Kickham, we'll let you wrassle with Nolan Ryan for five minutes. Yello? Yellllo?

I wish I knew what they were really offered, dang it. I would barely blog about it. And I'd make fun of them for a couple days, max. Yet my letters go unanswered …

But one of the biggest reasons the Giants didn't trade Hunter Pence is that they want to keep him. They want to make a deal to keep him around. Let's explore that idea.

Pence is 30. His new deal would start when he's 31. If you've never paid attention to his swing, here's a slow-motion GIF of it:

The first thing you ... wait, that might not be the one I was looking for. It's hard to tell, but ... hold on. Lemme dig around a bit more.

With a bonus screen shot: 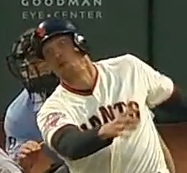 Dunno. Maybe Goodman Eye Center can get the Giants to rotate that electronic ad out during the Pence at-bats. Seems like it's bad for business.

What I see with this swing is a big setup, a late and quick load, and lightning-quick bat speed that allows him to get to the ball. I'm not a scout, nor am I especially good at faking like I know what I'm talking about. But that looks likes a swing that relies primarily on bat speed. That sounds silly, seeing as every player needs good bat speed to be a major leaguer. Marco Scutaro has good bat speed, and he's 50. But it looks like Pence has exceptional, otherworldly bad speed. One way to measure that is how fast the ball leaves the bat, and Pence is right at the top of the list.

That bat speed is going to be the first thing to go when Pence ages. By which I mean it will move from exceptional and otherworldly to really good. Some players fight through that and make adjustments. I'm pretty sure Scutaro's lost a little bat speed over the years, but he's as good as he's ever been.

I don't trust a 35-year-old Pence to make those adjustments. Not with his iffy plate discipline. Not with that swing. I think he'll tumble down Rowand Mountain at some point, and it'll happen just as quickly.

Not next year. And not the year after that. Maybe in three years, but I'd take the risk for a third year (because there's no way he's coming back for two). The fourth year would be a bummer of a season, I'm thinking. Pence keeps himself in great shape, but at some point even Mike Trout's bat speed will go away. That's the way Darwin created the world, which is one of the reasons I certainly don't want my kids reading about him. So a four-year deal would be dicey.

But almost all free-agent contracts are likely to end in tears. That risk is built into the cost of business. So while I'd prefer a three-year deal, a four-year deal like Nick Swisher's (which was for $56 million) wouldn't bother me too much. The last year or two would have some serious Rowand potential, but the short-term prognosis would be more of the same. And if not Pence, there isn't a lot out there. I love Shin-Soo Choo as much as the next guy, but you can't assume that the Giants will get him by fiat if they can't make a deal with Pence.

Five years? Thanks for the eyes and the speeches and the compensatory pick, Hunter.

Pence is having a pretty good season. He's a limited hitter who shouldn't be the team's only power threat, but he's a player who does a lot of things well. He's typically a three-win player when he's going okay, and I want him around next year. But I'd stop at the Swisher deal. Because unless he has a second career as a patient, measured hitter up his sleeve, I don't anticipate him aging like Ellis Burks or Larry Walker. I picture Pence aging more like Vladimir Guerrero, who was born in the same year as Scutaro, but hasn't been a good hitter since just before the Giants won the World Series in 2010.

Come on back, Hunter. But be careful, Giants.