I've watched baseball for a long time. Seen a lot of games. Lots of wins, lots of losses.

I've played video games for a long time. Had the original PlayStation. Loved that Final Fantasy Tactics, I'll tell you what.

This game was to baseball as the PlayStation was to this: 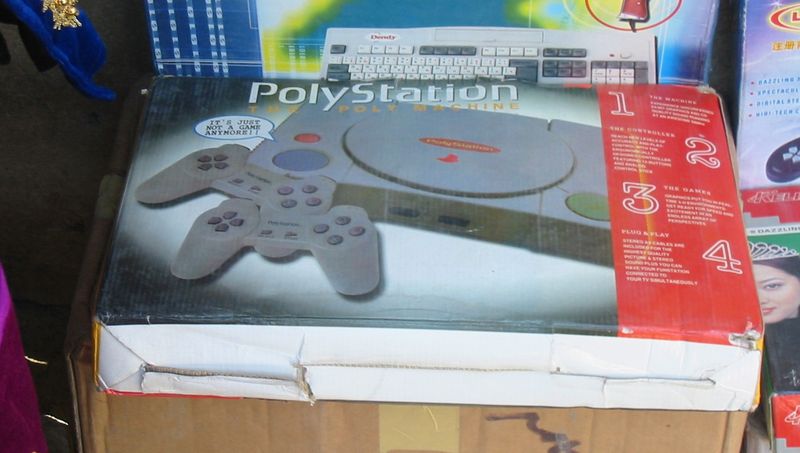 Looks like the real thing. It's almost the same. Not the same. A horrible substitute. Though I guess if you're on a desert island …

This was the PolyStation of baseball games. We are in Kazakhstan, and this is the only thing at the local Best Buy, so whatever. Seems awesome if you close your eyes and pretend. But I'm not sure that was baseball.

This game makes realize how rare it is for a team to out-awful the Giants. The Giants have received a few breaks this season, even if it doesn't seem like it. But the other team so rarely wets the bed quite like that. The Brewers walked Hunter Pence three times. That was the fifth time he's done that in his career.

The Brewers had the bases loaded and one out in the seventh, and they hit into a double play.

There was a wild pitch on an unintentional walk.

For their part, the Giants left runner after runner in scoring position, as they've done for the last four months. They made baserunning blunders and walked hitters of their own. They played Jeff Francoeur on purpose. But they couldn't match the awful of the Brewers. No, that was virtuoso awful. That was the Rachmaninoff of awful. Just dazzling.

If 28 teams didn't exist, that game would have been a thrilling win to pull the Giants three-and-a-half over the Brewers for the division lead. Also in this alternate universe, Mat Latos doesn't exist and A.J. Pierzynski works at a donut shop, where he specializes in looking apple fritters and looking stupid.

Chad Gaudin is the perfect mix of stuff and park. Maybe it wasn't his control that was off for his career, but rather his command because he was terrified of home runs. Maybe now he's comfortable biting off more of the strike zone because the outfield is so big.

Or maybe we're in small-sample heck. But in a world where Kevin Correia gets two guaranteed years, how much value is Gaudin going to have on the free-agent market? He could get the Correia if he keeps this up. Even more, perhaps.

The odd thing is that Gaudin's turn in the rotation doesn't happen without a Craig Stammen fastball running inside during a Ryan Vogelsong bunt attempt. Which means that Craig Stammen's crappy two-seamer and Ryan Vogelsong's crappy bunting just made Chad Gaudin a few million dollars.

Lady Luck, you are a mysterious one. Just stay out of Vegas ERs if you know what's good for you.

That isn't to say he's great or dominating or the best or a future All-Star. Belt has been okay this year. There have been ups, downs, big hits, big strikeouts, perky shoulders, slumpy shoulders. Really, it's been the whole spectrum.

But it's time to start violently reacting to people who think he's the problem. If you put him in Yankee Stadium, his neutralized batting suggests he'd be a .281/.366/.461 hitter. If you neutralize the league and park for 2004 AT&T Park, he'd be a career .282/.367/.462 hitter. Everyone ragging on Belt grew up with that league and that run-scoring environment.

Again, he's not great. But pretty okay, and with the potential for more. Three hits and a walk in a win tonight. Durn straight we're crowing about it. I've never felt the need to stand on the rooftops and sing an average player's praise quite like this.