Giants hang with Rays until they can't

David Price is so, so, so, so, so, so good and yet the Giants and Tim Lincecum are able to keep pace until the very end, when "bullpen on the road" happens.

Share All sharing options for: Giants hang with Rays until they can't

Losses sting. They certainly sting less midway through a lost season. Sting even less against the best team in baseball, with one of the worst pitchers on the team on the mound in a critical spot, and on a Saturday night, where limitless possibilities for fun and excitement exist. Why, line dancing or a WoW raid are mere minutes away, just as soon as Jean Machi puts the nail in your favorite baseball team's coffin!

The Giants lost to the Tampa Bay Rays tonight 2-1 in 10 innings. They had a few chances to drive in the go-ahead run late in the game but failed to cash in for numerous little reasons, but all of which were merely the smaller doll inside the mother Russian nesting doll: David Price.

The Rays' ace pitched the crap out of the Giants tonight. After Pablo Sandoval's first plate appearance (a defensive swinging K) I considered for a moment that Price had broken our free-swinging third baseman. I mean, just take a look at the sequencing: 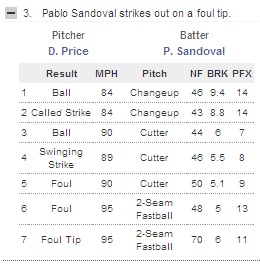 Changeup to not be predictable to the count. Backs that up with a change up. By now, Pablo Sandoval has no idea what's going on. In fact, I think this whole night the Giants' hitters were completely off-balance. It's one of the first nights I can recall where it felt like I could see the Giants thinking out there. There was definitely some feeling out going on between Price and the Giants, and I think Tampa Bay's game plan to pound the zone but with soft stuff really worked out. Price was never predictable to a count (backing up a lot of changeups with sliders and throwing off-speed and breaking balls on fastball counts) even though he tended to stay pretty squarely away from hitters for most of the game. But back to Pablo real quick --

That last swing of the plate appearance was telling. Pablo had no idea what was going on. And by sticking to the corners rather than working down or up, Price stayed away from any sort of Kung Fu Panda-type of magic. This was all setup by those first two changeups. David Price is a fantastic pitcher and that third plate appearance of the night really showed us how.

And that was exactly the David Price you'd expect coming into tonight's game. The dominant, unwavering dude who doesn't care if you're right-handed or left-handed. He got burned by Jeff Francoeur (career .800 OPS vs. lefties, mind you) and Joaquin Arias (.725 OPS in career vs. lefties), but ultimately, he didn't hurt himself with walks and his sequencing/strategy was perfect.

So it comes as a bit of a surprise that Tim Lincecum as able to match him through 7 innings. Not because Tim Lincecum can't hack it in the major leagues, of course, but because the aura, the sheen, the perception of the Tampa Bay Rays is such that a guy like Tim Lincecum could face a lot of trouble against them. Patience and power are really great traits to have as a team when facing Lincecum, but tonight, Lincecum's stuff also matched his sequencing and he was able to hold the Rays at bay. It's nice to consider Tim Lincecum's value as a starting pitcher heading into next season. Seriously.

Pitchers just tend to... go. Most of the time, it's the result of a physical breakdown. On rare occasion, it's due to a mechanical issue. Those mechanical issues aren't guaranteed to be fixed by coaching sessions and the creation of new muscle memory. But sometimes, a pitcher can make the adjustments that extends his career. I really, truly hope that's what has happened here. Tim Lincecum has been better than expected this year and he's really putting together an impressive run heading into the offseason (the game immediately following his no-hitter excepted, of course). Still, heckuva game tonight, Timmy. Heckuva game.

That lead-off walk to Jose Molina in the bottom of the third inning proved costly, as lead-off walks often do. It's entirely possible the Giants would've won tonight had it not been for that walk, but of course, I'm not suggesting that the loss is due to Tim Linececum, merely that the game's outcome hinged on a few key plays along the way.

Sweet, cholesterol-clogged Joe West and his strike zone of ???.

I'm not keen to write about umpires, #umpshow, or robot umpires. I will say that I can *appreciate* the human element, but only to a point. The dividing line comes down to inconsistency. Fine. You don't want to call the regulation strike zone that night but you call it consistent for both teams -- I can deal with that. Do as Mike Krukow suggests and have a zone for the home team and a zone for the away team and I lose my pants (in anger).

Aggravating an entire team feels completely wrong and far outside the bounds of "the human element". It's called being a jerk.

The Giants were down to Machi, Romo, and Zito. It's unclear why Rosario was removed, considering he was the long man. Of course, the Giants had a runner on second base, no outs, and a 3-0 count with Brandon Belt at the plate and turned that into zero runs, so, it's not like Jean Machi is the reason why the Giants lost the game. The game's outcome hinged on a few key plays along the way. But, seriously, Jean Machi, you could've mixed in a strike or two.

Seriously, though. This game tonight:

I agree, Brother Marco. I agree.

The kooky part is the Giants have a chance to win this series tomorrow. Somehow, not breaking up a rotting team has given them a new flavor. They're a tough team to face, even if they're not likely to beat you on any given night. They're wearing their big boy pants, but by virtue of calling them big boy pants they are not masters of the field. Still, it's nice to watch a team play competitively every night. Let's hope *that* trend continues for these final two months.