Masahiro Tanaka, the Giants, and you

Not sure what you have to do with this, really ...

Share All sharing options for: Masahiro Tanaka, the Giants, and you

Back in March, the Giants played an exhibition against the Japanese national team. I watched the game with 9,398 of my closest Japanese-reporter friends, and it was a revelation. Masahiro Tanaka pitched, and the dude's good. The resulting column was titled "Masahiro Tanaka, the object of your future affection" because everyone's going to want this guy. You do too, even if you don't know it yet.

But I certainly didn't think the Giants were included in that. Because the Giants don't want anyone interesting. That isn't to say they can't make good moves. But they make safe, respectable moves. Aubrey Huff. Ryan Theriot. Miguel Tejada. Mark DeRosa. They haven't committed more than $10 million to an external free agent since Edgar Renteria in 2009. Their last two big-ticket items were Aaron Rowand and Barry Zito, which is nature's way of telling you to lay off the big-ticket items.

So this, from Andrew Baggarly, is quite interesting:

The club’s scouting department is being mobilized like never before, according to sources. Even Pat Burrell has a plane ticket to Tokyo as the Giants get as many eyes as possible on Masahiro Tanaka, the 24-year-old right-hander who throws in the upper 90s, dazzled for Japan in the World Baseball Classic and is expected to be posted by the Rakuten Golden Eagles in a few months.

Scout #1: I don't know where he is. He was supposed to meet us here.

Pat Burrell: Let me get this straight. I put my money in the machine, and panties come out?

Burrell: Honest-to-goodness panties come out of this machine.

Burrell: All I need to do is put money in it.

Burrell: Just fill it with this yen in my pocket, or whatever, and I'm kayaking down a river of panties.

But the larger point is that the Giants are taking Tanaka seriously. Probably because they already have the design for the "Two-naka" shirts ready to go. It would be a surprise if the Giants committed $100 million to another pitcher so soon after chewing off their own arm and getting free from the Barry Zito deal. A big, big surprise. But they're at least taking the possibility seriously.

The obligatory YouTube video, with a LEGITIMATE WARNING that the video is soundtracked by ... some awful band covering the Spice Girls? Seriously, mute your computer before clicking.

A rather detailed scouting report:

I think he can pitch in the big leagues and pitch well, probably not at an "ace" level, but at a rate that is above league average and would slot in as a good 2nd best starter on a contending team.

The Giants are going to be looking for a pitcher this offseason. Maybe two. Tanaka is almost the only exciting name out there. 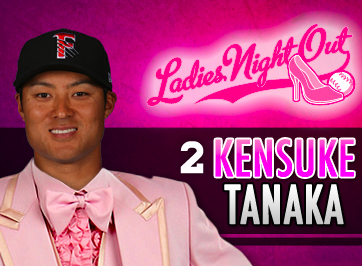 No, no, Masahiro Tanaka. And that dude's good. I'm not sure if I want the Giants to take this kind of financial risk, but I'd at least enjoy the thrill of the hunt.

The Baggarly article also indicated the Giants weren't ruling out Jose Abreu, a slugging first baseman who just defected from Cuba, but considering Brandon Belt's future with the team, that seems pretty unlikely. No, the white whale of the offseason is probably going to be Masahiro Tanaka. I'd give the Giants a teeny chance at signing him, but I would have given a teeny chance that they were going to be interested in the first place, so I've already been wrong.

Last offseason was the dullest on record. There was a Conor Gillaspie trade in March. A bunch of the same people came back for a lot of money. That was it. But if the Giants are serious about pursuing Tanaka, this offseason is already much, much more exciting.