Without knowing the exact number: 1-for-8 with runners in scoring position.

This was the pitch that cost the Giants the game: 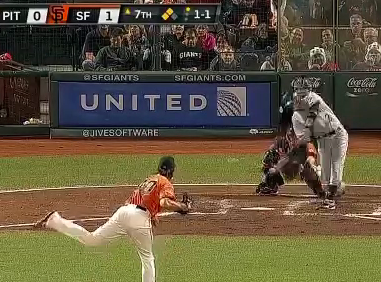 Do you see it down there, in the bottom-right of the zone? It was a 1-1 breaking ball in a perfect spot. Low, tempting, just at the knees and off the plate. Could have been called a strike by a bad umpire. The kind of slider that you're supposed to throw to a hacker in an even count. And Clint Barmes is most certainly a hacker. His career OBP is .296. Hold on, though: He spent eight years as a Rockie. Pedro Feliz watches Barmes hit and says, "Damn. Some brain-dead hacking at slop, that's what that is." 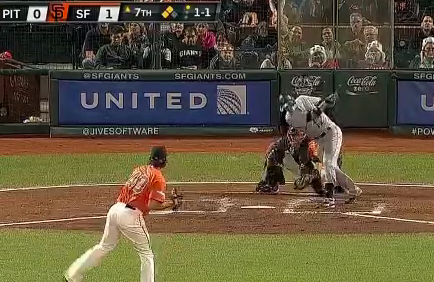 I used to have a video on YouTube of the foul ball I caught in 2005, but MLB Advanced Media determined that it was too hot for the Internet. In the video, Mike Krukow makes fun of me because I was apparently looking at my feet when I caught the ball behind my head.

That's what Barmes did. He was looking at his feet. Except he's a millionaire, and I'm just some schlub who knows where to get baby-weasel GIFs.

Like a young Andres Torres, that little guy. Respect.

I mean, that Hector Sanchez three-run homer from last week? That's what good teams get all the time. Clint Barmes is the Barry Zito of the Pirates' payroll if you adjust for scale, but he didn't hit his yearly three-run homer in a 10-2 game. He did it after Clint Hurdle gave away an out to put runners in scoring position in a 1-0 game.

But if you come to our secret meetings and say the not-safe-for-work password balls, you can complain as loudly as you want. Because this is some bullpuckey, right here. Straight up, don't care who hears it. Bullpuckey.

I don't mind the failed stolen-base attempts because this team can't hit home runs. Not like Clint Barmes. So they should send the guys with good career success rates, like Hunter Pence or Gregor Blanco. Those attempts took perfect throws, and that's what Russell Martin delivered. He welled up strength from his cavernous, black soul, and made perfect throws.

Man, usually Charlie Morton loses the close, well-pitched games to the Giants just like Roy Halladay. Instead, it was Clint Barmes with the three-run homer off the shoe tops. Dammmmmmmit.

Because you didn't ask, here are the losses from the post-Castillo era with fewer pitches than the Pirates threw tonight (101):

Loooook at that game from last September, #4. I can't tell if that's a historical anomaly because there are games like this fouling up the database (look at the number of pitches by Angels pitchers in that game). But it's pretty freaky. Seven runs in a game with 93 pitches? Why, that's the kind of performance you'd expect from a championship team.

At some point this winter, someone's going to post something on Facebook like, "34 days until Opening Day!" You would be justified in defriending that person and spreading scurrilous rumors about him or her. Because this is a horrid game, and it appeals to horrid people. A. Bartlett Giamatti was right. Assuming he ever said anything along those lines.