I've prattled on and on about the Giants' relationship to the Pirates before. The Giants are the Marlins of the Pirates. Always there, hiding around a corner, ready to annoy the bejeepers out of them. Here's a timeline: 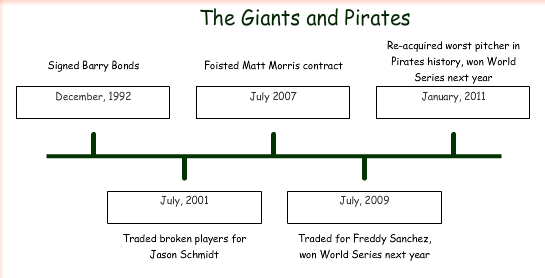 Like you would have the restraint to use a different font when referencing the Matt Morris contract.

The Pirates haven't finished over .500 since the Giants signed Barry Bonds away. Think about that. Bonds is almost 50 now. Things that were different back then:

I know that was all on the Comic Sans timeline, but I am absolutely incapable of getting over this.

The Pirates are good, though. Much, much better than the Giants. They have a dominant bullpen, exciting young hitters, and a fantastic rotation. They even vogelsang up an ex-Giants prospect to help them in their playoff push. And you don't even need the latent guilt from recent Giant/Pirate-relations to root for them. Everyone is rooting for the Pirates. Even Reds and Cardinals fans are kind of like, well, I guess if the Pirates win …

Here's the point: This is the series were finally get to see if the Giants are really a bunch of assholes. Apologies for the language. I don't like gettin' crass on the front page unless it's warranted, but the alternatives were "jerks," "finks," or "louts." And those just wouldn't do. No, if the Giants decide, after three months of playing the most miserable baseball possible, to play really, really, really well against the Pirates, they're assholes. There isn't another word for it.

If they figure out how to reverse course now, when it matters only to the Pirates, they're assholes.

Which I'm not against, really. I'm still rooting for the Giants. But I want to see their true nature. I want to look inside their collective souls.

Exactly. The rest of the season is all about the silver linings. Is Vogelsong pitching well? Does Lincecum look like he'll be a viable option next season? What is Belt cramming down people's pie holes now? Is Sandoval's new old new body going to translate into more hits? And if they lose, you can always appreciate the improved draft order. Now, if they lose to the Pirates, they can improve the draft order and help along a team that might eventually take on the Dodgers in the playoffs. I'd prefer the Giants win now because I'm greedy, but that's not a bad silver lining.

Will the Giants comply, though? I have a really strong feeling that they're going to be assholes on this one. It'll be fun to watch, unless they play just as horribly as they have in the recent past. Because that stuff is completely unwatchable.

Hitter to watch
Starling Marte is why people got (and I guess "still get") excited over Francisco Peguero. Dem tools. There aren't any guarantees the player will ever hit, but if they do, they'll be stunning.

Unfortunately, Peguero is a few months older than Marte, so the time is running out for him to do anything close to that. But at least we can look at Marte and see what it's like when one of the toolsy types makes good on his promise. Still a chance, I guess. Still a chance.

Pitcher to watch
This will be the first time Francisco Liriano has pitched in AT&T Park. Will he do it under Soviet rule like he does in the alternate-timeline fan-fic I wrote back on 2005? No. But it's still kind of neat.

While this would seem like a good time to complain about the A.J. Pierzynski trade, it's probably a better time to reflect on how much more unimpressive Liriano's career has been than you might think. From an article I recently wrote for Baseball Nation:

Which one is Jonathan Sanchez? If you said the one with more walks, why you'd be … oh, you'd be correct. Because the guy with more walks is obviously Sanchez. But it's sort of freaky how close the two are.

Liriano's had value, don't get me wrong. But in the same way that Sanchez had value. It turns out the real stinker to give up in the deal was Joe Nathan, who clearly would have helped the Giants to the playoffs in 2004 and is a fringe Hall of Fame candidate. Which means we can watch Liriano without that lingering sense of regret.

Well, we can regret that the Giants have a bunch of players who chase his slider, but that's the narrow view.

Prediction
At no point will we sit back and think, "Man, the Pirates are beating the Giants." It'll be completely expected. Which is certainly a weird twist of fate.