Giants lose heartbreaker to ... wait, what?

They won, everybody. The Giants beat the Red Sox.

Share All sharing options for: Giants lose heartbreaker to ... wait, what?

And in 2013, there was a walk-off win against the Red Sox. The players looked around, smiled a bit, and ambled onto the field to shake hands. The crowd was politely appreciative. Brandon Belt went out to congratulate Marco Scutaro and got caught between a hop and a tackle, so he kind of hockled into him. Everyone was really pleased. Just so pleased.

The strangest game of the year, methinks.

From the fourth through the sixth inning, the Giants had nine at-bats with a runner in scoring position. They had a runner in scoring position and no outs in all three innings, including two triples with no outs. They didn't get any of those runners home. It was art. It was Larry thinking of a brand-new way to hit Shemp with a mallet, something that totally redefined what it meant to be hit with a mallet. It was beautiful, that failure, just beautiful.

The Giants won, anyway. And when they won, they kind of looked around and said, "Well, that wasn't unpleasant." Which was exactly the right way to approach it. The Giants won, and I have no idea how they did it. That hasn't happened a lot this year.

First, what you've been wondering: 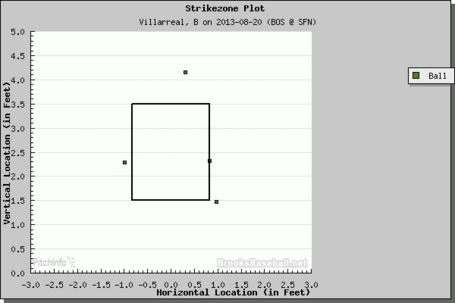 That's the last pitch of the game, from the catcher's perspective. It was probably a strike, but it wasn't as obvious as it looked. David Ross stabbed at it, too, which didn't help anything. But you will never see that again for the next … oh … 20 years. A game-winning walk-off walk on a 3-0 pitch right on the corner. Umpires look for those pitches. They look for the pitches two inches farther off the plate. There have been studies on this stuff. An umpire calling that pitch a ball in that situation is as rare as … why, it's as rare as catcher's interference calls in back-to-back games.

So, no, don't feel guilty for the close call going the Giants' way. Not that you were thinking that.

I was all set to roll with a silver-linings post. The end of the season can still be a successful one, of sorts, if Ryan Vogelsong pitches well enough for the Giants to exercise his option. He would have to pitch extremely poorly for them not to exercise the option, but that's kind of what he's been doing all year. He was pitching poorly enough to make the option less than a sure thing. After some first-inning misery, Vogelsong started the grind, grind, grind that he's so good at, and he pitched his Voglesongiest game of the year. Seriously, that's the game they put on the back of the dust jacket on the book about Vogelsong's renaissance. It was vintage, classic stuff.

And Brandon Belt looked sensational again. For the second time this week, he was just a homer short of the cycle, working counts and using the whole field.

Between Vogelsong and Belt, there were enough good signs to take the sting out of a loss like that.

Except the Giants won. They were 0-for-11 with runners in scoring position. They still won. They snatched humble winnings from the jaws of … wait, no … they tickled victory at the base of the fe … no, no … hold on. There's a saying, but I can't place it. Wait, here: snatched victory from the jaws of defeat. What a weird saying. What does that even mean. And they didn't so much snatch the victory as much as they watched the defeat fall down the stairs.

Whatever it was, it was pretty cool. And Shane Victorino got hit with another pitch! This was the kind of game you would have told your kids about if it didn't make you sterile.

I can't remember who tweeted this box score, so my apologies. The year was 2004, Jake Peavy (Padres) and Ryan Vogelsong (Pirates) matched up for the first time, and all of these things happened in the game:

And Bruce Bochy managed, of course. Apparently Peavy/Vogelsong match-ups are the full moon of the baseball world.

The Giants were 0-for-11 with runners in scoring position. They led two innings off with triples, and they didn't score. I'd like to think in the sixth, Brandon Belt stopped at second on purpose because he's superstitious.

You probably had an idea this was coming. All of the walk-off walks since the Giants moved to San Francisco:

It's rarer than you think. I don't remember any of them.