A modest proposal regarding Jeff Francoeur

No, but seriously, though. This makes sense.

Share All sharing options for: A modest proposal regarding Jeff Francoeur

Of the players with 3,000 plate appearances since 2008, Jeff Francoeur is the second-worst when it comes to Wins Above Replacement. He's also the only one with an on-base percentage under .300. That's almost 15 points behind the next outfielder on the list. There's a scouting term for this kind of player. 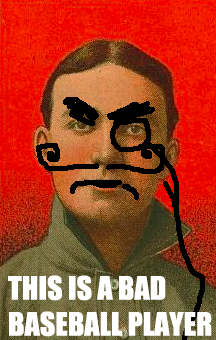 Indeed. And on Monday night, Francoeur was in top form. He saw four pitches. First there was a three-pitch strikeout. Then there was a one-pitch groundout. Then he was pulled in a double switch. This is like burning a pizza and starting a fire on your first day working at the donut shop. Why were you even making pizza in the ... give me that, you're fired.

Francoeur is popular in the clubhouse, though, and with 10 days until the rosters expand, there's no reason to jettison him now. He's not the reason the Giants are bad, and it's not like they're going to be good without him. But if it's all the same to everyone else, I'd like to watch someone else now.

Juan Perez is the likeliest candidate to take the job away. He can do everything Francoeur does poorly just as poorly. But he can also do everything else really, really well.

That's the easy answer, though. To show how serious I am about not wanting to watch Francoeur, I will make a bold proclamation.

I would rather watch Eugenio Velez start every game in left field than watch Francoeur start at all.

I've come to this decision after hours of quiet contemplation, and I'm entirely serious. Reasoning:

"It's been a while since Eugenio Velez has contributed, and that has to feel good." -- Duane Kuiper

Do you realize how awesome it would be for him to break that streak in a Giants uniform, how genuinely excited he would be? I can't. This would be so much more exciting than the next Jeff Francoeur at-bat.

4. He makes outs in hilarious ways instead of boring ways
Jeff Francoeur strikes out and hits into double plays. Borrrrring.

Velez reaches first on a dropped third strike, and then he gets picked off because his shoelaces are tied to the umpire's shoelaces. How'd that happen? Velez. You can't buy that kind of entertainment.

5. He is not Jeff Francoeur
Literally a different person. And I'm done with the Jeff Francoeur era in San Francisco. I wanted it to be like the Joe Carter experiment in 1998. I wanted to look like a fool. Turns out that when the Royals want a player off their roster, that player probably isn't so good at baseball. Not compared to 750 of his peers, at least.

Look, it's not me, it's you. And if it were up to me, we'd be watching Eugenio Velez right now. Why not? Lost season, everyone. We're basically throwing things into the campfire to see what explodes. And if it meantno more Francoeur, I'd welcome back Eugenio Velez with open arms.

That's how serious this has become.

Look into my eyes. I would rather watch Eugenio Velez.

Other than that, the Francoeur experiment is still in its infancy. Maybe the next 62 at-bats are when he figures it out!

Jeff Francoeur and the Giants: Peanut butter and petroleum jelly