Hector Sanchez wins it for Giants in ninth

Share All sharing options for: Hector Sanchez wins it for Giants in ninth

Here's an honest question: When's the last time you sought out the highlights from a Giants game? Maybe it's a part of your daily routine. Used to be a part of mine. Whenever the Giants would get a big win, it was standard practice to hear how Jon or Dave called it. Then to hear how Kuip called it. Back to the radio, back to the TV. Couldn't get enough of the highlights, the moments where the game turns around and the announcers share it with you.

I don't remember the last time I did that. I'm not talking about going to MLB.com to re-watch a Belt homer, but rather getting the entire box set of a good game. Looking through the deleted scenes from the director's cut. Poring over every last detail until the next game starts.

And in the middle of August, just when we're wondering why we're still paying so much attention to the 2013 Giants, we all get one of those games. I can't wait until the radio highlights are up.

Standard disclaimer that if the Giants pick first instead of fifth, we're arguing about Tim Beckham instead of drawing Buster Posey's face on our Pee-Chees, so nuts to the draft-positioning talk. That's something to make you feel better about a loss, not something that should prevent you from feeling good about one of the best wins of the season. 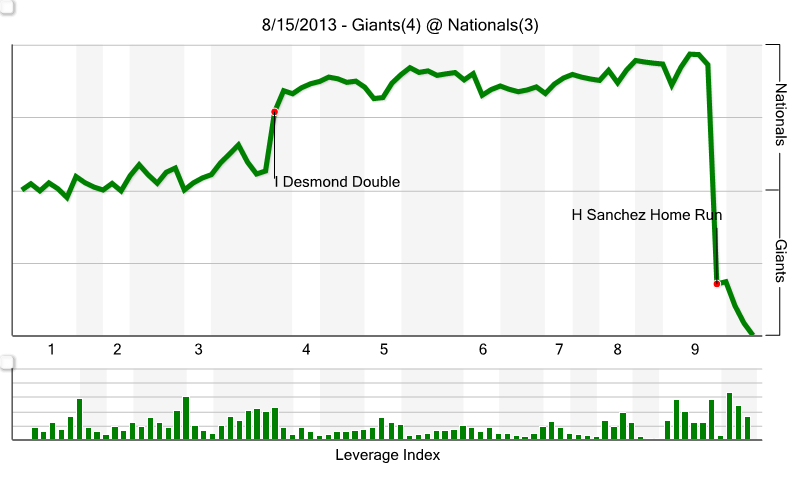 These two teams were more likely to meet in the playoffs than they were to be several games under .500 in the middle of August. It was the World Series of Disappointment. And the Giants almost swept the World Series of Disappointment. There would have been a disappointing parade (everyone jammed into a burro-pulled cart going up Lombard Street, but unannounced so we can't even laugh at it), and a disappointing visit to Jerry Brown's first childhood home (the current resident would have disappointing lemon squares ready).

Instead, Hector Sanchez took a pitch at his waist. According to the lasers, it was the last out of the game: 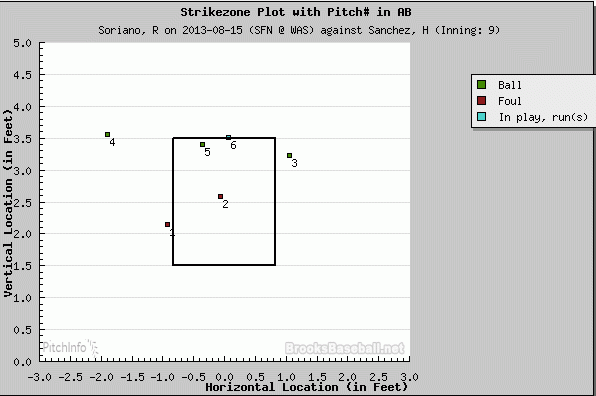 The next pitch was even higher. And we'll never know where it landed. It doesn't matter. A Giants game just ended, and you're thinking positive thoughts.

No, not positive thoughts. Euphoric thoughts. Thoughts that make you want to watch another baseball game right now. It's been too long.

Did you read this post from earlier today about the Giants not getting any well-timed hits since June? That's okay, I'm sure you'll get around to it.

But if you did, please note that Hector Sanchez now owns the highest single-game WPA for the season. Serendipitous at worst. Hilarious at best. Probably both.

It doesn't happen without the Roger Kieschnick walk, mind you. Right before Sanchez's home run, Kieschnick learned from a mistake. The Brooks Baseball chart: 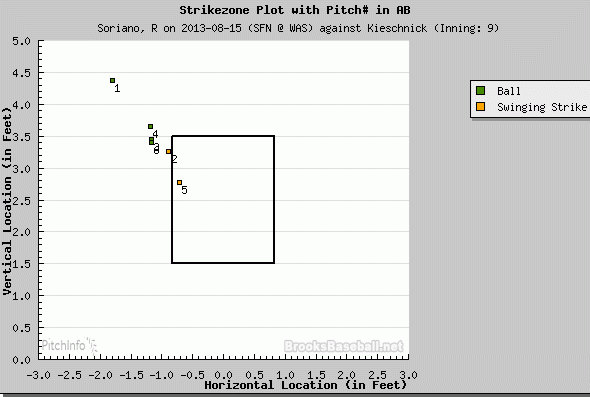 With an 0-1 count, Kieschnick swung at a pitch that he couldn't hit with Manute Bol's arms. Not with that swing. So Soriano did what any veteran pitcher would do. He went there again and again and again. But Kieschnick never chased it again.

I'd guess that if one slider or changeup were worked in, maybe the outcome is different. But that's ex post facto thinking. At the time, it probably made a lot of sense to keep throwing that fastball. It didn't work out for Soriano, who, as a reminder, is a dingus.

Real talk? I'm much more interested in Belt standing farther back in the box than I am in his new grip. I guess the resurgence could be both. Or neither. Whatever. With this hot streak, Brandon Belt is suddenly having a very nice year, which is a drastic change from the nice year he was having until then.

At least we get to laugh at and shame the anti-Beltites again. Before today, a list of the first basemen in Giants history with an OPS over .750:

The best part is that we're so close to not having these stupid arguments.