Did Jonathan Sanchez's no-hitter end on a bad call?

No, the call was pretty rad. But was it incorrect?

Share All sharing options for: Did Jonathan Sanchez's no-hitter end on a bad call?

In the no-hitter-mania that's followed Homer Bailey's outing, and with the dismissal of umpire Brian Runge, good ol' Jonathan Sanchez is getting a mention here and there. He's getting it for something that drives me batty, though.

It started with a writeup on Runge from Rob Neyer. Runge was dismissed for drug-related issues, and Neyer noted that Runge called Sanchez's no-hitter. But Neyer also noted that the Wikipedia page for Brian Runge had this description:

On July 10, 2009, Runge was behind the plate for San Francisco Giants pitcher, Jonathan Sánchez's no-hitter. Runge made a dramatic called third strike to end the game on a pitch that appeared to be a ball.

Later that night, Andrew Baggarly had a note about Runge, and he wrote this:

Even most Giants fans would have to admit in their heart of hearts that Jonathan Sanchez’s final called pitch that struck out Everth Cabrera, clinching his no-hitter in 2009, was outside.

Did Runge expand the zone to make it happen? To glom on to a big moment? I suppose only he can answer those questions. I’ll always wonder what would’ve happened if Sanchez had to throw another pitch, though.

I'm with Baggs in one respect: I wonder what would've happened, too. It wasn't an automatic strike. Some umpires would have flinched before calling it a ball. Some umpires wouldn't even consider a breaking ball like that. There was a brief pause before the call where everyone held their breath.

But it was probably a strike. If you don't want to go that far, the evidence shows it was at least a close, ambiguous pitch. To the lasers! 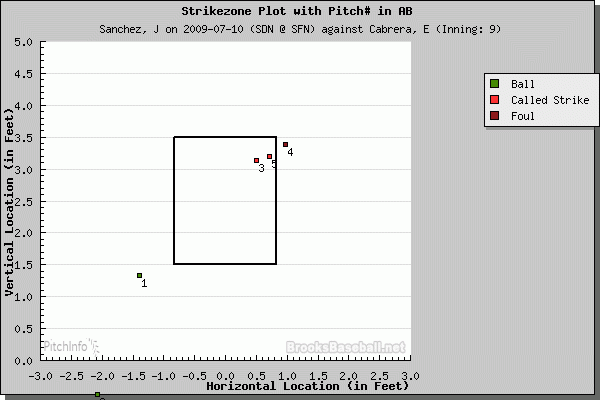 Again, this is from the catcher's perspective. Pitch #5 was the called strike. Pitch #2 was eaten by a grue. (It's actually way below "-2.0" because Jonathan Sanchez was still Jonathan Sanchez for a few seconds that evening.) That #5 is pretty clearly in the strike zone.

If you want GameDay, even though it's less accurate, here you go: 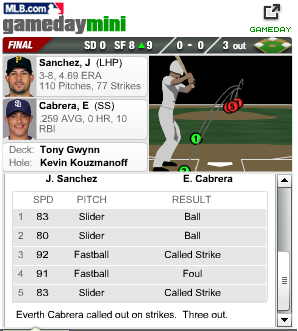 It wasn't outside. A screenshot confirms this: 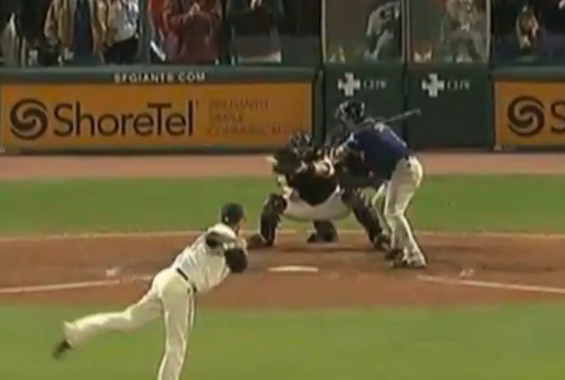 Remember, that's from a camera that's on the left-field side of home plate. A true-center camera (which should be required by law) would have made it even more obvious.

It could've been high, though. Everth Cabrera is an Altuve-and-a-quarter tall, and he gets his scrunch on like Rickey Henderson getting sucked into a Ghostbusters trap. The Brooks Baseball screencap suggests the ball was 3.25 feet off the ground. Well, so was the top of Cabrera's head. So maybe it was high.

But if this wasn't a strike, what would Cabrera's strike zone look like from the camera's perspective? 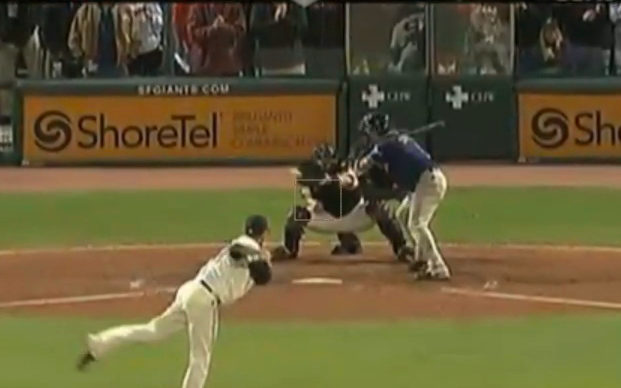 Nope. That's a postage stamp. That's not functional. I don't care how many Altuves he is or how much he watched Rickey growing up. That pitch was on the edge if you're willing to give Cabrera short points. If you're not, well, you're a bad umpire. But I'd be a bad umpire because the Eddie Gaedel business is annoying.

The pitch wasn't an obvious strike. But I still think it was a strike. All I want is for people not to think it was an obvious ball. And that concludes this installment of "Thinking About Things From the Past to Better Ignore the Present."