Closer Strikes Out the Side, Vol. IV

This is the Criterion Collection version, which means there are a couple extras, too.

Share All sharing options for: Closer Strikes Out the Side, Vol. IV

Hello, and welcome to another installment of Closer Strikes Out the Side, in which we fete the brave folks who close out baseball games for the San Francisco Giants, and who do so with contributions to the strikeout arts. It's rarer than you think, and the occasion deserves to be feted.

While I was secretly hoping for the Reds to walk off in the second game of the doubleheader, that wouldn't have been as exciting as Sergio Romo having his best stuff. Because when he does, he's just about the most compelling pitcher in baseball.

He had his best stuff. To the GIFs!

One continuous motion from swing to bat flip. Bat flips can be a joyous one-motion event. Cody Ross and Juan Uribe taught this to us. It was their gift before they betrayed us. But bat flips can also be a beautiful, painful complement to the human condition.

Great example of Romo-related body language in this one. How do you feel about that at-bat, professional baseball player Todd Frazier? 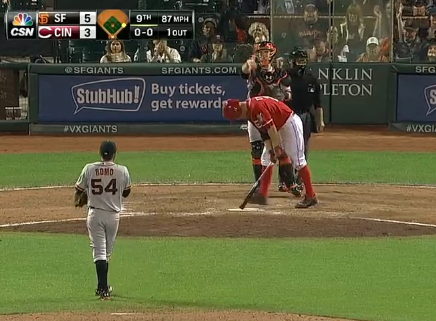 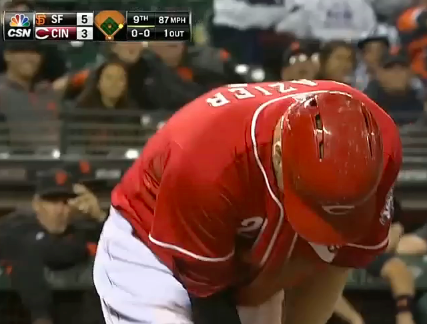 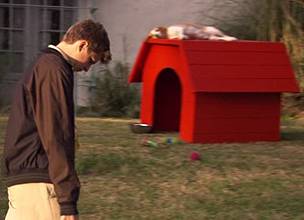 The best romohumiliation.tumblr.com candidate of the year. Mike Krukow said, "I don't know if he could have hit that with two bats," and I'm not sure if it was hyperbole.

I'm not sure what Photoshop setting I have toggled to make Romo look like he's on fire in an 8-bit video game, but I kind of like it.

Mesoraco has murdered the Giants all season. You wouldn't have suspected him of murder because he has such gentle eyes. But Romo hath slain the Devin, and verily he did rejoice.

Closer Strikes Out the Side is one of my favorite traditions around here. It means the Giants won, and it means that a pitcher who has his job because of previously exhibited nastiness did, indeed, exhibit a particular brand of nastiness to end a close game.