The cliché is that a tie game is like kissing your sister. The joke is that, well, wait. I think I just got the joke. Good lord, that's creepy. No, no. That won't do.

Splitting a doubleheader is like being told you have nice eyes by … getting a back rub from your roomate's … being in one stall and hearing your boss's wife in the other … look, splitting a doubleheader is just weird. There's so much discouragement and ennui built up from the first loss, but before you can wallow in it, there's a nice, calming win to take the edge off.

It's weird. I watched seven-plus hours of baseball, but I only remember about three of it. Our brains probably have a fail-safe mechanism built in. This is genetic, passed down from the days when monkeys who paid too much attention to monkey stick-games were eaten by larger monkeys and didn't get to breed. Serves them right. I remember the days when I was romantic about doubleheaders. But that is literally a Godfather and Godfather II of baseball, with some Godfather III thrown in. Except the Godfathers were written and directed by Troy Duffy. So good luck with that.

The first game was a debacle. It's cute to watch the Latos/Posey gif over and over again, but eventually you have to switch it up to this one:

Stop, stop. He's already dead. It fit with Tim Lincecum last night. It fit with Eric Surkamp on Tuesday. All of those warm fuzzies about Surkamp this morning, where I mentioned that we probably didn't see the best version of Surkamp? Yeah, about that:

He was probably still the best option for a spot start the Giants had in the system. Remember that when you read someone with a cockamamie trade idea for Ervin Santana.

Here's the glory of a doubleheader: We don't have to dwell! There was a Giants win tonight. The other stuff, pffff. So what if the Giants have retired the Reds in order four times over the last 27 innings? Not important. The Giants are on a .500 pace for the last two (2) games. That's an improvement.

Of course, a .500 pace isn't good enough with two months left. But, whatever, we'll worry about that tomorrow. The Giants have the staff ace going, you know.

Barry Zito started the game and lasted a couple innings. He was a third of an inning away from a "few" innings, and the win that would have went with it. Santiago Casilla got the win instead, and the Barry Zito Countdown is at 11 or 12 starts, give or take a demotion when Ryan Vogelsong is back. So let's focus on Santiago Casilla.

Boy, it sure would have been nice to see Santiago Casilla come into the games that Affeldt blew in the ninth.

That's about enough of the Zito talk, and I'm not sure if there's anything else to say about Casilla. He looked good. But a quality middle reliever on a team like this is like a blinged-out case for your Virtual Boy. Maybe you'll fool someone into thinking you're cool once. But there's always a Virtual Boy underneath the case, y'all. Don't get fooled. Sure would have enjoyed that case a month ago, though.

Bruce Bochy won his 1,500 game. This is important because we have 10 fingers and 10 toes, and that's why we use a base-ten number system. Look, I read that on this site, so it's probably true. Look at all the stimulating math content they have, too:

Love you, Internet. You're the worst and the best, but mostly the worst.

Back to Bochy, though. This is a relevant list:

The opinion of Bochy seems to shift a lot depending on whether or not he's winning championships. But he's still my favorite manager since Roger Craig. And when Roger Craig was manager, I thought Bobby Brown's Don't Be Cruel was the best album ever released, so I'm willing to revisit every opinion I've made since then.

There are opinions and strategery that I've disagreed with. Overall, though, he's been a good manager, and I respect the hell out of him. Ninety-nine wilns, and he buries that goofball at #19.

He'll do it with another World Series win, too. Not that I'm greedy.

More on Sergio Romo tomorrow as a part of one of my favorite series on the site. Until then, a quote from Mike Krukow on Chris Heisey swinging through a Romo slider:

"I'm not sure if he could have hit that with two bats."

Last, but certainly not least, a still shot from the CSN broadcast by way of @gidget. 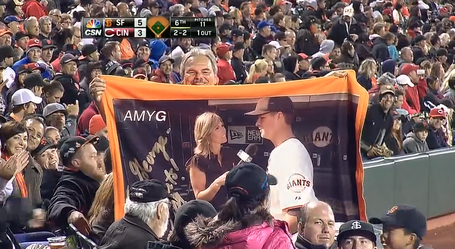 There are no ... I mean ... he had to make the blanket and have her autograph it. Or he had to get the autograph on a picture, and then surreptitiously get it made into a blanket.

Mostly, I'm just ticked off that someone trumped the Cammy Blackstone patch on my denim jacket.