The title is icky, of course. You want to take a shower. Not to be the boss of you, but I don't think anyone would really object to that. Just thinking about trading Lincecum makes you feel icky. If he signed a $125 million contract before the start of the 2012 season, this place would have erupted in mirth and glee. Fifteen months later, it's considered a reasonable proposition to trade him. For shame. For shame.

But we kind of have to dive right in because the deadline's-a-loomin'. In two weeks, Tim Lincecum might not be on the Giants. When you say it like that … goodness, that's creepy. Ann Killion had a long piece in the Chronicle yesterday (subscriber-only) that suggests fans would react harshly to a Lincecum trade right now, especially after the no-hitter. Killion compares the situation to the 49ers jettisoning Joe Montana to make room for Steve Young.

From a fan-favorite standpoint, maybe there's a comparison there, but just about everything else is different. Montana was hurt; Lincecum isn't. The future of the Niners' franchise was being blocked by Montana; Lincecum isn't blocking anyone. Montana was still good when he was healthy; Lincecum has been … erratic. Football is played with a football; baseball is played with donuts and tar, among other things.

No, Giants fans won't revolt if Lincecum is traded. Okay, maybe the ones on Facebook who complain about one-year tenders to pre-arbitration players, and maybe the ones who think the Giants should trade him only for a couple #1 picks. But most of the Giants-loving world would understand. Pending free agent. Hasn't been the same for two seasons now. Farm system in a bad way, at least at the upper levels. Bad team. Unlikely to be back. Really, the decision makes itself.

But here are the two most relevant questions with any potential Lincecum trade. Figure out these questions, and you'll figure out what the Giants are going to do.

1. Is he really gone after the season?

How gone we talkin', here? Has he already made up his mind? The Giants would have a pretty good idea, I'd think. They're talking to his agent, feeling out the possibility of Lincecum staying around for a couple more years, at least.

If you take the name away, strip the history and the subtext of "Tim Lincecum" away from the player, he's a pitcher I'd argue for this offseason. I'd argue rather loudly, to be honest. The advanced metrics suggest that he's much, much better based on his strikeout ratio. The Giants will have some rotation holes to fill this offseason, and taking a chance on a FIP monster who might be undervalued is exactly what they should do to fill one of those holes. They can't afford to sign six CC Sabathias, even if there were ace-types like that on the market, which there aren't.

High-strikeout guy with possibly deceptive ERA? Yeah, if the price is reasonable. That should be the focus off the offseason, regardless of the back story or name in question.

But I can also see Lincecum thinking that while AT&T Park is great and Dave Righetti is super, that he needs a change. He's won Cy Youngs and World Serieses. He's thrown a no-hitter. Did a push-up, ate an egg here … what more can he do? There might not be a better change-of-scenery candidate in baseball right now.

2. What in the heck could the Giants really get for him?

The Giants can't get top prospects for Tim Lincecum.

Maybe they can! I don't know. But I'm almost certain that the success of Tim Lincecum in 2011 and in the 2012 playoffs isn't going to translate into top prospects, plural, in 2013. There's just not enough cost certainty in him. Plus he's a rental. That's not something even Rumplesabean can spin into top prospects. 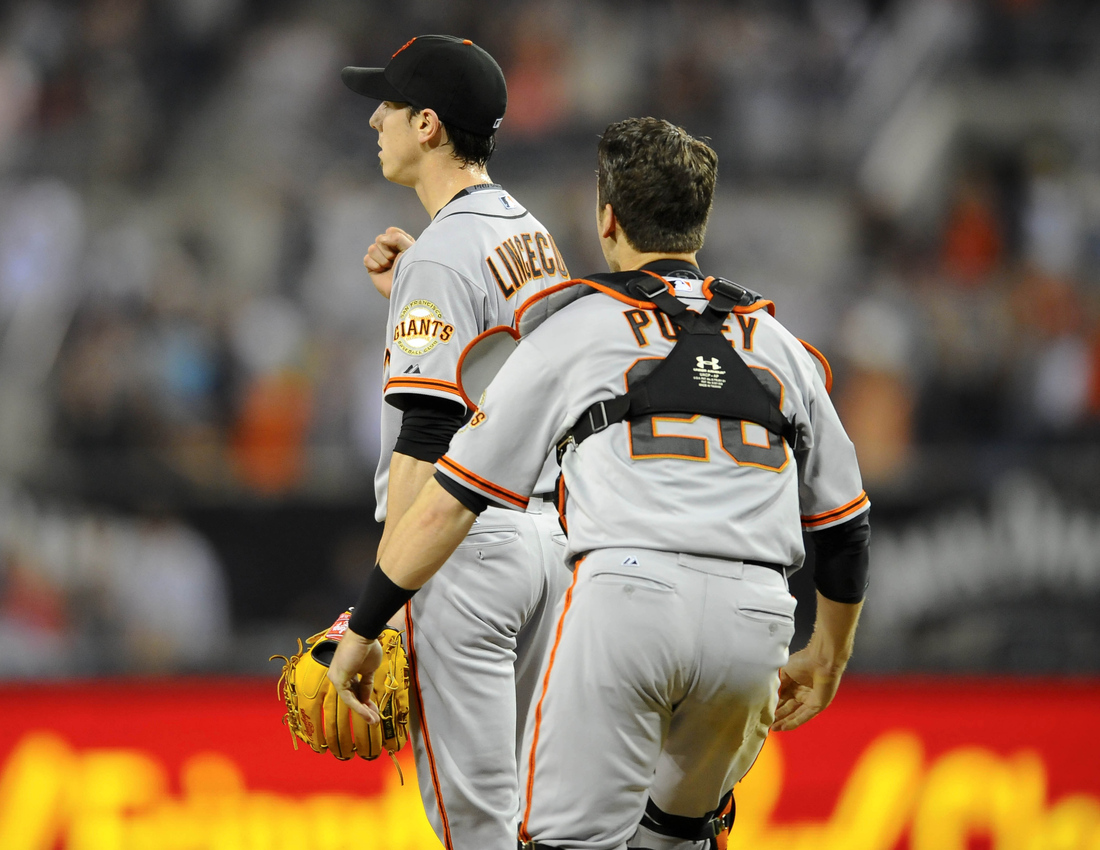 But top prospect, singular? Still doubtful. Maybe possible. Maybe as part of a larger deal. The Tigers aren't going to give up Nick Castellanos for Lincecum, nor are they likely to give him up for Sergio Romo. But both, together, with the Giants eating millions? It's something the Tigers have done before, with Anibal Sanchez and Omar Infante adding up to the previously untouchable Jacob Turner.

That's how Lincecum will bring a top prospect -- as a part of a larger deal. But on his own, we're not talking the first half of Baseball America's top-50. We might not be talking the second half. And from there, depending on how much money the Giants would have to eat, now you have to start asking if the extra months of negotiation and potential for good vibes are worth more than the B prospect.

Or you go back to the first question, and trade him for the sake of getting anything at all back? The qualifying offer is going to be something like $14 million next year, which means the Giants would need to offer Lincecum a one-year, $14 million contract if they want the draft pick. The Giants might be scared to offer that kind of money for one year of Lincecum. They didn't do it for Angel Pagan, and then they signed him for a lot more money. So maybe the Giants would take the Darren Ford of current prospects to save a little money and get something back.

It's all pretty interesting. And depressing. But the important thing to note is that the Giants will win just enough games to make them do exactly the wrong thing. I'm guessing that there's about an 80-percent chance that he stays. Have no idea if that's the wrong thing. Ask again in five years.