It's hard to care when you put it like that.

There is a Home Run Derby tonight. Then there is a Celebrity/Legends softball game. None of it is especially relevant to Giants fans. The closest thing the Giants have to a representative in either event is Darryl Strawberry, and even though he hit the only grand slam a Giants hitter ever had off Pedro Martinez, he doesn't count.

In fact, it's been nine years since the Giants had an entrant in the Home Run Derby. A full list of Giants who have participated since 1985:

That's it. Should we care? Probably. Because it means that the Giants don't have any of them fancy home-run hitters. But when it comes to watching the silly thing, we probably shouldn't care about it because the Home Run Derby is objectively awful, even if I secretly like it.

(And I would pay money to watch Hunter Pence, to be honest.)

David Wright
Relationship to the Giants: Matt Cain hit him in the head with a fastball once, and then started Doffgate by doffing his cap in response to Mets fans booing him off the field. Also, Wright sticks his tongue out a lot.

Michael Cuddyer
Relationship to the Giants: Still kind of shocked that he isn't on the Giants, to be honest. His low-defense, high-slugging ways would have made for a good Pat Burrell replacement. And by "good," I mean "bad." Except Cuddyer's good now. So maybe the Giants should have signed him. This is all so confusing.

Bryce Harper
Relationship to the GIants: Nothing, really. He misplayed a ball into a Giants win earlier this year, and he really, really likes Pinterest, which has a San Francisco office.

Pedro Alvarez
Relationship to the Giants: Nothing, really. When he slumps, he's like the player that people think Brandon Belt is. But when he's hot, he hits a ton of dingers.

Chris Davis
Relationship to the Giants: There used to be Chris Davis for Matt Cain rumors, don't forget. But that's about the only connection.

Prince Fielder
Relationship to the Giants: Looked bad in the 2012 World Series, which was a great help. Did the stupid bowling-pin Jesus thing after that home run, once. But that doesn't exactly make him an arch-nemesis.

Robinson Cano
Relationship to the Giants: Melky Cabrera seemed to like joking around with Cano last year. Other than that ... well, not much. The Rangers got to pick between Joaquin Arias and Cano to complete the Alex Rodriguez trade, and they picked Arias. That's a kind of connection.

Yoenis Cespedes
Relationship to the Giants: He made a goofy catch against the Giants that one time. A's fans seem to like him.

There aren't any Giants. There aren't any former Giants. and there aren't even Giants arch-villains to root against. My kingdom for a Hairston! Sorry, everyone. Even by Derby standards, this is pretty lame.

In conclusion, here is a picture from today of Bob Weir in front of Willie Mays's Hall of Fame plaque: 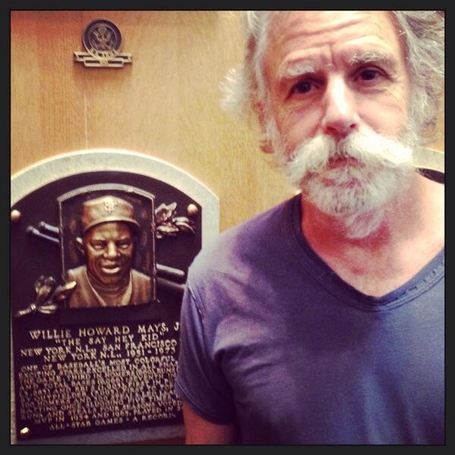