There are a lot of videos on MLB.com related to Tim Lincecum's no-hitter. This is the best one:

Funny. I'm not in withdrawal from Giants baseball yet. That's odd.

But I'm still in the mood to watch that video about 700 times between now and Friday. And it's not just for personal enjoyment, either. I'm watching it for science, too.

For example, after being doused with water, Lincecum went on a hugging tour. This gave us vital information: 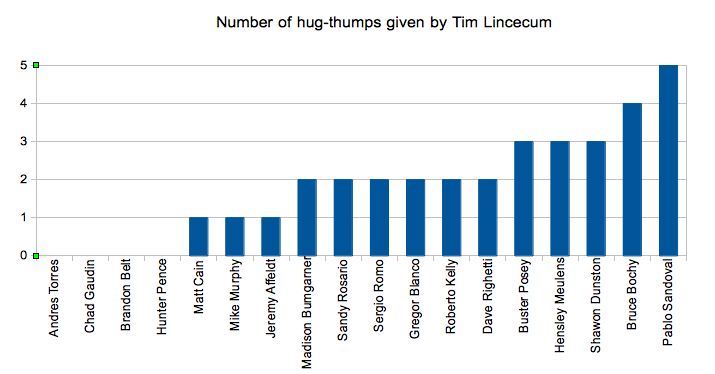 For science. What does it mean? Everything. He used two different hands for his Righetti hug-thumps. That's probably important, right? I've studied those numbers and determined what Lincecum is going to do this offseason with 99.3-percent accuracy. But that's a post for another time.

And have we talked about Pence's awkward entry into the dogpile? It was awkward. He wanted to go full-dogpile, but then he wanted to throw up some horns, and he kind of got caught in between.

Finally, turn up the video at 2:24. Listen to Lincecum call for Buster Posey, and then blow by Chad Gaudin to get to him. It's … kind of amazing. Out of my way, minor-league free agent. I'm trying to get to Buster G.D. Posey.

If you're missing baseball already, there's probably something wrong with you. But this will help. This will help. Gonna watch it again, if you don't mind.