Share All sharing options for: Nate Schierholtz is good now 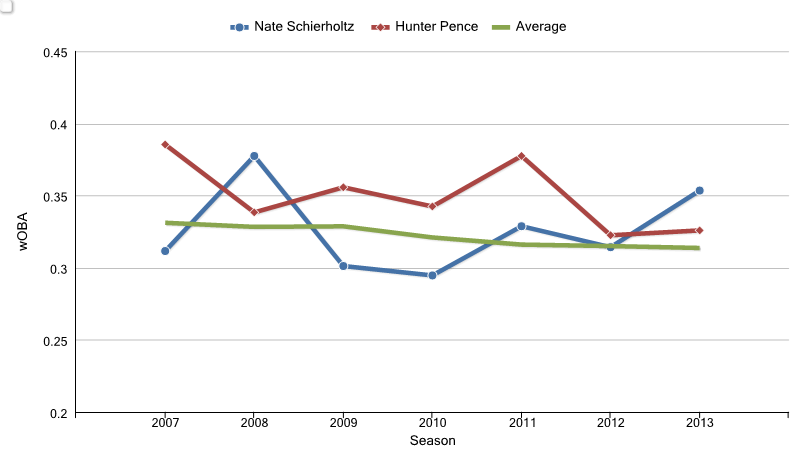 When it comes to offensive contributions, Nate Schierholtz has been better than Hunter Pence this year. They were comparable last year. Pence's defense has been a pleasant surprise this year, and he has a good arm, but Schierholtz was pretty close to Gold Glove caliber out there.

Point is, they're pretty comparable players when it comes to value. Schierholtz's power spike this season might be a fluke, but if it isn't, he's turning into a pretty nice hitter. And we can't forget about that arm:

So this is a short post with a poll. Tell me what's going on:

1. Nate Schierholtz was always good, but the Giants jerked him around so much, he never got a good shot.

2. This is a sample-size fluke.

3. Left-handed hitters will always look greener on the other side of the fence. He's the same player.

4. He changed something in his swing/approach, and now he's legitimately good.

5. Don't care. Hunter Pence hit a baseball three times with one swing and the Giants won the World Series and he's hilarious and kale is surprisingly tasty.

Before you answer, note that this is Schierholtz hitting a homer with the Cubs:

And this is him hitting a homer with the Giants:

He's scrunchier with the Cubs. He also keeps his left hand on the bat in the top clip, whereas the second one is a vintage Nate swing. Dunno what that means. Maybe he did that on his own, and maybe the Cubs told him to do it. If it's the latter, that means the Cubs just out-diagnosed the Giants with a player the Giants had for six years.

The important thing is that the Phillies non-tendered Schierholtz so they could get Delmon Young, so I don't feel so bad. Just curious as to what's going on with Nate. I'm pretty happy for him.