If you want to feel a little better about the Giants' trip into Cincinnati, note that this is a headline in Redsville today:

Of course, for the Reds, that means that they're just a lousy 10 games over .500 and on pace for only 91 wins. The horror. The Giants, meanwhile, look like they're swinging a hula hoop at a golf ball when they have runners on base, and their bullpen is like something that would happen if the titular character of The Island of Dr. Moreau had a Guillermo Mota fetish. The Giants are on pace for 78 wins exactly halfway through the season. Maybe the Reds are that good, and maybe the Giants are that bad.

I'm still not sure about the Giants. I know, I know that I'm one of the leading distributors in Giants-related doom and ennui, but it's worth remembering that the Tigers were under .500 at this time last year, too. There's a decent chance that the Giants can get swept in a postseason series, too. Don't be so glum. It looks like the Giants are the worst team in baseball because that's how they've played over the last 10 days, but I'm still not sure we've seem them at the fork in the road yet.

I'm pretty sure about the Reds, though. They are that good. Shin-Soo Choo isn't best-player-in-baseball good like he was earlier in the season, and neither is Todd Frazier. But I'd take the 25 best Reds over the 25 best from all sorts of teams. Probably the Pirates. Maybe the Cardinals. They'll turn it around and make the playoffs.

Here's why they will fail in the playoffs, though. It's a new theory I've been working on. It's called the Nothing Nice Ever Happens To Mat Latos Because He Is Awful Theory. I still hold a special place in my heart for Dusty Baker. Joey Votto is one of my favorite non-Giants, and Tony Cingrani is one of my favorite young pitchers. The Reds are among the league leaders in not being the Cardinals, so they have that going for them, too.

But nothing nice ever happens to Mat Latos because he is awful. He was going to win the Cy Young in 2010 and lead the Padres to the World Series, and then his arm tuckered out on him. This happened because he is an awful person who deserved it. He pitched in San Diego in 2011, which … well, it was probably really temperate, and that's nice, so maybe he'll get lucky. But then this happened:

Because he is awful and because Buster Posey is righteous and because this is how the world works in my understanding because it's easier that way.

Here's Latos's Ralph Wiggum moment, in which his heart rips in half. 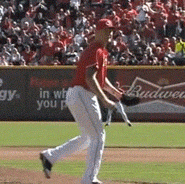 Not to belabor the point, but this happened because Mat Latos is awful. If Latos got in a violent bare-knuckled boxing match with A.J. Pierzynski, who would win? All of us. But I think I dislike Latos even more. There's also that little matter of him completely dominating the Giants over his career. Except for that one time when Buster Posey was up. Which was cool.

Four games against the Giants, and Latos isn't pitching? Amazing. That doesn't mean he's not going to be responsible for everything bad that happens to the Reds this season and/or postseason, though.

But he's the closest thing to Bonds with the plate discipline since the big guy was forced out of baseball, and that makes Joey Votto inherently compelling. Of course, he's still not that close to Bonds (who walked more in 2004 than Votto did in the last two seasons combined), but he's as close as we can come. He's a fun hitter to watch most of the time. Any Giants series being the obvious exception.

Pitcher to watch
I answered a few questions over at the Red Reporter, and they asked if I thought Pablo Sandoval for Homer Bailey was a fair trade. And ... say, it kind of is. If the Giants aren't willing to risk Sandoval on a long-term deal (just a wild guess, not based in anything substantial), I'd be for that deal. If the Giants are still in wait-and-see mode on Pablo with regard to his health and conditioning, then, no. I'd prefer to keep Sandoval around for a few years.

That doesn't mean Bailey is the pitcher to watch, though. Just bringing that trade idea up. No, the pitcher to watch is Tony Cingrani, who is a fascination of mine. Maybe they'd do Pablo for Cingrani? Maybe they want a Charlie Culberson-type. Regardless, you can read about Cingrani here and here, if you're so inclined. He's like Madison Bumgarner with a few extra feet of fastball and 75 percent of the polish.

Prediction
The Giants don't score a run off Mat Latos, who is awful.