Because I'm spoiled and I want a Cuban sensation, too.

And then I said, hey, I'm a grown man. If I want to rosterbate all day, I can do that. No one's going to take my kids away from me if I do it. And if they did take my kids away, I'd finally get to open the copy of Bioshock Infinite I got for Father's Day. Oh, the irony.

We're still a month from the trade deadline, so everything's going to be tradetradetradetradetrade for a while. But one of the key things to think about with any deadline deal is that the Giants are likely to have rotation openings in 2014 (and 2015 and 2016 for that matter), so pitchers who aren't rentals might be a little more attractive than they might have been at any time over the last several years. It's why we're even talking about Bud Norris.

But there's another pitcher out there who could help in 2014. Heck, maybe even this year, though that's pretty unlikely. The Giants aren't linked to him yet ... and probably will never be ... but that's not stopping me from dreaming for a bit. Behold: Miguel Alfredo Gonzalez.

He's the guy in the beginning, if you couldn't tell. 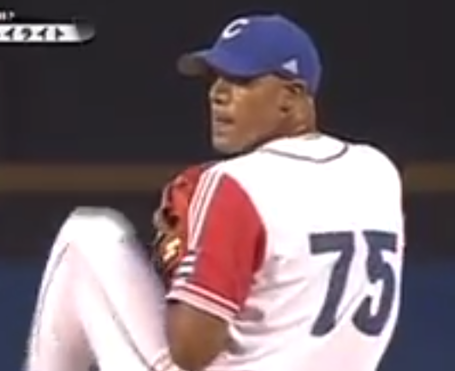 Well, he's going to have to get a new number when the Giants exercise that Zito option. But you can see what there is to like. The video's from 2010, so maybe Gonzalez has lost velocity, but that's a clean motion, a lot of movement, and good break. He's 26, so he isn't subject to the international spending restrictions, either. This is a chance for the Giants to finance some financial muscle and ...

...dammit so much. Other teams are interested, but you know Gonzalez is going to the Dodgers.

He's no Alfredo Despaigne, but he's probably not Osvaldo Fernandez, either.

Great, now I'm down an Osvaldo Fernandez rabbit hole. Curse you, Chronicle for your searchable and free archives!

Three Giants executives are staying at a hotel in the Dominican Republic where Joe Cubas, the agent for Fernandez and fellow defector Livan Hernandez, was meeting with representatives from major-league teams well into Saturday morning.

Giants general manager Bob Quinn said Friday night he "can't characterize where we may or may not be" in regards to Fernandez, who also is believed to have received offers from Toronto and Florida.

Fernandez, 29, is believed to have struck a three-year deal with San Francisco and could join the starting rotation immediately. Sources said his deal is not quite as lucrative as the four-year, $4.5 million contract that Livan Hernandez, a 20-year-old Cuban pitcher, got earlier in the day from the Florida Marlins.

"This is one of the most significant days in the history of the Giants' franchise," said general manager Bob Quinn, who introduced Fernandez and his agent, Joe Cubas, at a news conference in the Stadium Club. "Clearly, this was the case of the handicappers handicapping us last, in a field of eight or nine competitors. And we ended up the winner through the efforts of our people."

ONE OF THE MOST SIGNIFICANT DAYS IN THE HISTORY OF THE GIANTS' FRANCHISE.

A lifetime of dreams and a moment of daring have brought him to this day, and Osvaldo Fernandez is ready to take the stage. Before him at Joe Robbie Stadium tonight will be a lineup of Florida Marlins' hitters, ready to put his Cuban-honed skills to the test.

Since he signed with the Giants, Fernandez has heard people question his age and the decision to pay him $3.2 million over three years. Atlanta Braves GM John Schuerholz suggested the Giants overpaid and Florida Marlins GM Dave Dombrowski claimed Fernandez is 42 years old.

And, from Glenn Dickey's Sabean's Doubters Should Say They're Sorry

For Sunday's game, I sat in the stands, and there was a constant buzz of excitement at the pitchers' duel between the Giants' Osvaldo Fernandez and the Marlins' Alex Fernandez -- the kind of excitement I haven't felt, frankly, since just before the 1994 strike.

Last week, I wrote about the Marlins' open-wallet approach to building a team. The Giants (...) can't afford that approach, so Sabean has worked to build the team through smart trades and economical free-agent pickups.

And Osvaldo's career numbers with the Giants:

Well, shoot. Seemed like such a good idea! And ... wait, sorry. I have no idea what just happened. This has nothing to do with Osvaldo Fernandez. Just once you're down that hole ...

Anyway, the Giants should sign this Gonzalez cat if he's any good. I at least hope the Giants are watching him. There's at least a decent chance that he's much better than Matt Garza over the next few years for 80 percent of the price. When the Giants don't sign him, I hope it's based on talent instead of money, because they're probably going to spend that money on pitching this offseason, anyway.