Over at Amazin' Avenue, Eric Simon has a post about why David Wright should start the All-Star Game instead of Pablo Sandoval. You might remember Simon as one of the two people in the world to post an article here on McCovey Chronicles without my knowledge. He did it because I was drinking in a bar with you people, but still. That kind of moral compass is why he does the things he does, and his scurrilous article is no exception.

1. Simon posted two GIFs, one of David Wright hugging a young fan, and one of Pablo tripping because of fat and cake and fat.

2. He then asked which player was better suited to represent his league in the All-Star Game.

Some Nixon-style deception, there. It merits a response.

See, I've been thumping the Scutaro drum because he's old and beloved. And great. He's never been an All-Star; he's never been especially close. The Mets dicked around with him because they're horrible, but he's made up for lost time with his subsequent organizations. And he should make the All-Star team, preferably as a start. But I didn't really care about Pablo Sandoval getting the start. He made it last year, and he's been hurt and erratic this year. I preferred to spend my energies on Scutaro.

But the more I think about AA's post, the more frustrated I get. After all the complaining last year, Sandoval got a huge, three-run triple against Justin Verlander in the All-Star Game that gave the Mets home-field advantage in the World Series*. Yet it's Mets fans who are mad at Pablo? There are 19 million people in the New York City metropolitan area -- 15 million more than the San Francisco Bay Area. There are about 800,000 people living in the city of San Francisco; New York City has 10 times as many residents. But Mets fans still complain about Giants fans stuffing ballot boxes. They have computers in New York.

I'm not above using images as a counter-argument, either. And this is who you're voting for when you vote for Pablo Sandoval:

He's one of baseball's more fascinating hitters, a guy who is as comfortable with pitches above his eyes as he is with pitches bouncing in front of the plate. He's compelling. He's a reason to watch baseball.

David Wright is a bread sandwich with the crusts cut off. His face is boring. His name is boring. It's a delicious,healthy bread sandwich, maybe with cucumbers and a yogurt spread. But still boring. He's a great hitter, but he makes you want to do your taxes, not watch more baseball. 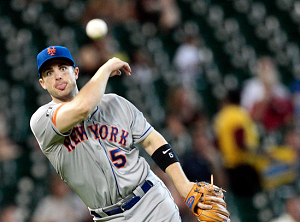 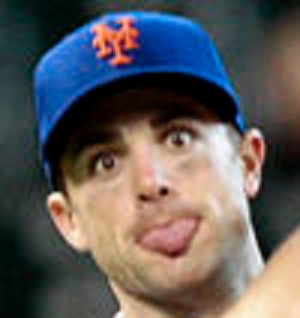 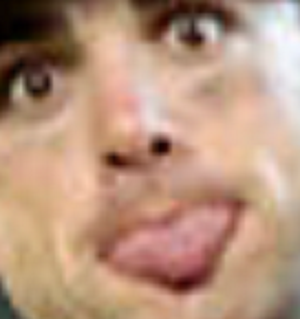 By contrast, Pablo did this against the Tigers and noted tooth weasel Justin Verlander:

He hit two homers off the best pitcher in baseball, then hit another later in the game. You want to watch that. Everyone wants to watch that.

Real talk? Pablo Sandoval is challenging for a starting spot even though he doesn't deserve it, and some people think this is because Giants fans are stuffing the ballot box. I disagree. Hunter Pence deserves a spot more than Sandoval, and he can't crack the top five in outfield voting. Scutaro is having a better season than Brandon Phillips, but Phillips is in the lead. Buster Posey is the greatest living American, but even he slipped to second place. If there was stuffing going on, all of those Giants would be well ahead.

David Wright is basically Edgardo Alfonzo with an obnoxious tongue and thicker eyebrows. Mets fans are into that sort of thing, I guess.

Which means Sandoval is getting support from outside the Giants circles. Regular fans, people trying to do the right thing, are choosing Sandoval as the third baseman they want to see. Because he's interesting. He's compelling. He's a star. They know him. Wright has the better numbers. Wright is almost certainly the better player.

But people want to see Sandoval.He's more compelling than Wright. The numbers suggest otherwise, and I'm partial to those shiny numbers. But I'm not going to waste of time using the results of a popularity contest to wonder why one player has more votes. Because he's more popular, you fools.

The other reason you should vote for Sandoval: because he plays for your favorite team, and it's fun to impose your will on others.

In conclusion, Edgardo Alfonzo is awful and David Wright is boring, and you should vote for Pablo Sandoval.

* In an alternate universe where women keep their newborn babies in kangaroo-like flesh pouches, cars drive people to work, and Ryan Theriot is a legitimately good DH option.