Or, 10 facts about the Dodgers.

I apologize for overreacting to a Giants/Marlins series in June. The Giants are still over .500, they're getting one of their best hitters back from the DL, and the starting pitching isn't the debacle it was earlier in the season. These post-game things are written quickly after distasteful losses, and sometimes there will be a fingertip in the canned food.

I do not apologize for anything I write about this coming Giants/Dodgers series. This series is absolutely made for overreacting. It's coming at the absolute perfect time.

Imagine a Dodgers sweep. The sun crashes into the sea, boiling all living things. The core melts through the Earth's crust, and the fabric of space-time is ripped asunder. The last thing you see are the people you love pulling the skin off their faces and cackling at you with faces of bone, just bone.

The good news is that this also applies to the Dodgers, who are … lemme check … in last place. They're feeling a little panicky right now, too. They're as close to the Marlins as they are to the Diamondbacks, and it's not like the Diamondbacks are running away with the division. They'll overreact to the bad stuff just as much, if not more. So let's look at 10 Facts About the Los Angeles Dodgers to get us ready for this series:

Fact #1: Yasiel Puig is shaped like one of the breakdancers in Daft Punk's "Around the World" Video
This is indisputable. 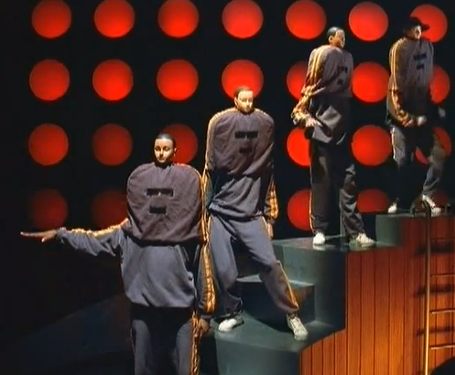 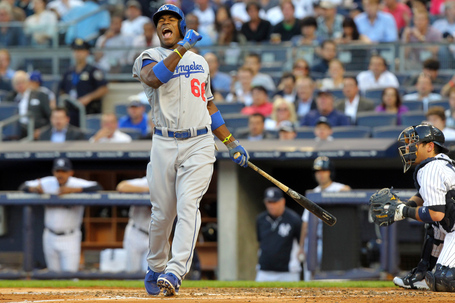 This is also the first time the Giants will face Yasiel Puig. I'm afeared.

In case you've been living in a Giants isolation chamber, in which opinions about Jean Machi are more important than what's going on around the division, Yasiel Puig is kind of a big deal. All spring, we heard about him as if instead of Jeff Goldblum went inside the Telepod with a housefly, Mike Trout was trapped in there with Bo Jackson. Then he went to the minors, and kept showing off. And now he's in the majors, doing unbelievable things. He's also playing like Andres Torres on the Jacob's Ladder anger-acid. Look at him go!

There's a strong chance that he'll be tormenting the Giants for the next decade. For now, I'm going to drop a Raul Mondesi comp on him because I can. And because it makes me feel more comfortable without being a negative fanboy -- Mondesi was quite good.

Fact #2: Clayton Kershaw is pitching for the Dodgers on Wednesday, even though True Blue LA lied and told me he wasn't
I did a Q&A with TBLA today, which you can find here. In it, I answered a question that had this in it:

Based on scheduling and the rotation, Clayton Kershaw won’t get a shot at facing the Giants this time around.

And I got excited. Turns out they're a bunch of liars over there, smdh.

Fact #3: Clayton Kershaw just struck out Hector Sanchez twice
Sanchez is starting behind the plate on Wednesday night, of course. Just accept it now and move on by tomorrow.

Fact #4: I can't figure Hyun-Jin Ryu out
I called his signing one of the worst moves in the offseason. Obviously, that was a horrible prediction, even by my own moronic standards. But now his strikeout rate has dropped over his last several starts, he's walking a fair amount of batters, but he's allowing fewer runs. Is he even better than he looked in April, which was already quite good? Or is the league catching up to him?

Probably the former. I don't think the league really catches up to the plus-plus-changeups.

Well, when there's some semblance of command behind them. I'll always give changeup-monsters the benefit of the doubt. And not only did the Dodgers spend a billion on a major-league contract for Puig, but they had enough left over for Ryu a few months later, even though they didn't really have an open spot for either.

Which is all to say, embrace the Dodgers' struggles now, because that last sentence suggests a team that can fix things in a danged hurry in the most annoying way possible: with money.

Fact #6: Matt Magill walked nine players and allowed four home runs in one start
It was the only time in history that happened. Ask if the Giants get to face Matt Magill. Go on, ask.

Fact #7: Juan Uribe is actually doing okay this year
He's hitting .267/.357/.400 with three home runs! His walk rate is through the roof, too. Over four percent over the league average! He's walked more in 158 plate appearances this year than he did in either of his first two seasons with the Dodgers. He's been good for nearly a win, which is what he was worth in 2010, apparently.

And in 10 years, we'll all be able to appreciate Juan Uribe just a little bit more. Actually, I really appreciated him last year, to be honest. This sudden production is pretty obnoxious.

Fact #8: Brandon League is no longer the Dodgers' closer
Probably because he's awful, but I'm not so caught up on the whole story. This is actually a good thing for the Giants, as one of their greatest enemies in the wild is the Struggling Closer:

These guys are sitting in dark hotel rooms right now, giving up runs. But when it comes to the Giants, they get shut down. So if the Dodgers have a lead to protect, it'll be the job of the talented Kenley Jansen, who is much better. Good.

Actually, I'm not sure if the Giants have ever had a hit against Jansen. I'm guessing 19 innings pitched, 1 H, 38 strikeouts. Let's check.

Huh. I don't remember that at all. Sounds like fun! Thank goodness he isn't incompetent, like Brandon League. For whom the Giants were close to trading, you know.

Fact #9: There are 89 photos of Tommy Lasorda in my photo tool
Here are three of them! 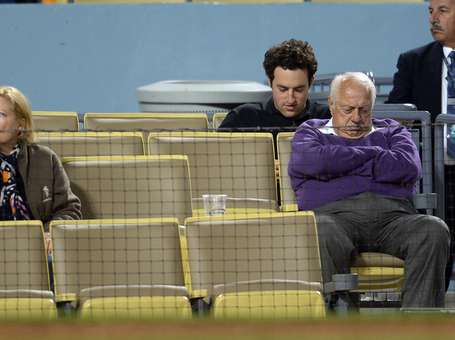 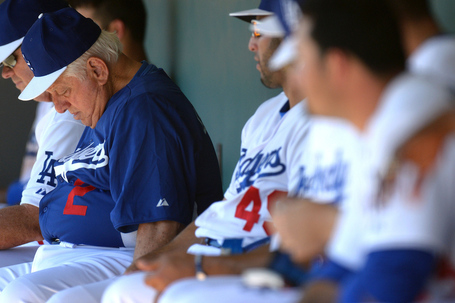 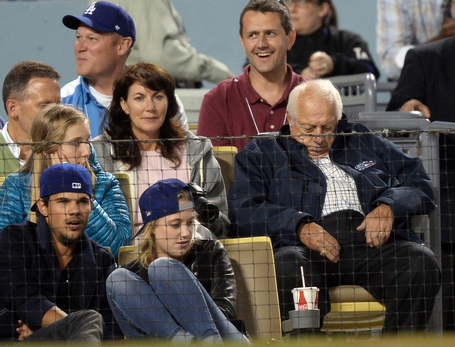 Fact #10: I should have stuck to five facts

Uh, lessee ... Andre Ethier is worth less than Clayton Kershaw even when you don't add Kershaw's pitching into the WAR equation ... Stephen Fife gets "Award Tour" stuck in my head ... Zack Greinke has beady eyes ... the Dodgers still have a Hairston, as required by law ... Kershaw just got Sanchez to pop up ...

Whatever. Embrace the overreaction. It's coming.