Because the "Do This For Me Because I Lack the Talent" Contest just didn't sing, dang it.

But I'd trade it all in for Marco Scutaro to get a starting spot. He's close, just 300,000 behind Brandon Phillips, who is having a boring year. Their stats in comparison:

You can see how Scutaro has the clear advantage in every category. More than that, Scutaro has been a fan favorite wherever he's gone, a plucky, hardy fellow who didn't make it out of the minors until he was in his late 20s. Try watching this documentary without pulling for the guy. Now imagine that story having an All-Star start tacked on to the end.

There are just under two weeks of voting left. That's a gap Giants fans can make up. I've been reading writers I respect talk about how Giants fans stuff the ballot. Pretty sure if the Giants fans were stuffing the ballot this year, Posey would be up by several hundred thousand. The Giants are getting the kind of votes you'd expect from a contending team that draws well. Which is what they are. I'm not sure why the vote totals are still surprising people. Last year's were out of control; this year's are pretty normal.

I humbly request that they go back out of control, if possible. But only for Scutaro. At least, he's the only one I really care about. I'm pretty sure Posey doesn't need our help, but Scutaro does. 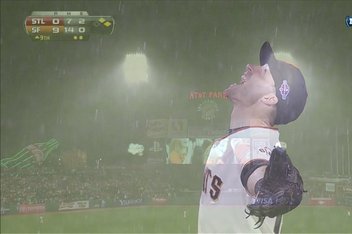 ... and make a propaganda poster out of it. After over an hour, I gave up and put Comic Sans on it. 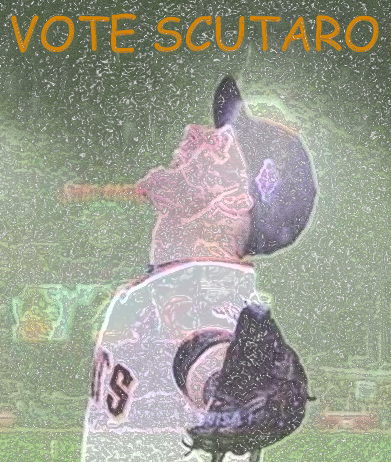 Because screw Photoshop, that's why.

I just want something that I can append to an upcoming series of Vote Marco Scutaro posts, as well as something that I'll tweet out every five seconds until I lose half my followers. It could be that Comic Sansy up there takes it. It's funny because Comic is right in the title!

So if anyone out there has an inkling of artistic/design talent, and if you happen to be killing time on a Friday, pretending to work for the next two or three hours, maybe you can help. It's the Marco Scutaro Propaganda Poster Contest, in which the winner gets ... satisfaction? Like, the satisfaction of helping Scutaro to the All-Star Game? Seems pretty satisfying. Also, there can be multiple winners. Winners of nothing in particular. If we can flood the Internet with Scutaroganda, all the better.

His finger was malleted, but he has risen. He is Marco Scutaro. If people are mumbling about ballot-stuffing now, I'd like to see what everyone's saying when Scutaro wins the overall voting by 7,000,000,000,000 votes. That's the kind of influence I'm pretty sure I have.