Sergio Romo walked as many batters as he did in May, and the Braves walked off in the ninth inning.

Pretend we live in a perfectly logical, karma-in/karma-out universe. In this universe, whenever the Giants win a game late, they have to repay those good tidings by giving up another game late. Cause some heartbreak? You know some heartbreak is coming your way.

In this universe, the Giants would be kind of hosed for the next few months. They've had far more come-from-behind wins than stumble-while-ahead losses. This would be be the first of an avalanche, and it wouldn't be pretty.

Except I would counter with this: Losing a game like that in Atlanta, with the standard, obnoxious, and repugnant chant droning on in the background, counts as three or four stumble-while-ahead losses. This counts for a lot. Hell, the whole thing. The Giants are paid up, rest of the league. We're starting from scratch! It'll be kind of a relief when the feeling returns.

First thing of note: The walk to Justin Upton was legit: 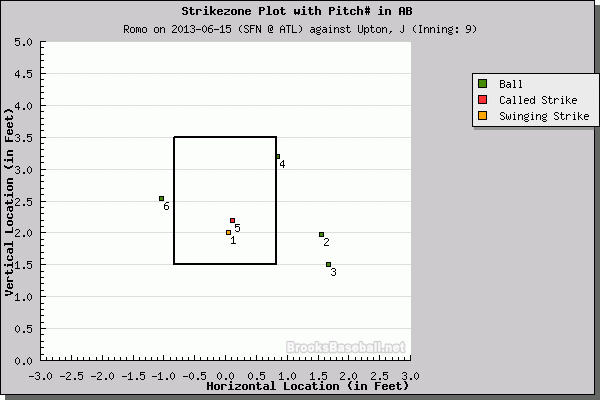 That's from the catcher's perspective, and the pitch (#6) just missed. It's also not an animated GIF, but keep hovering your mouse over it, just in case.

Sergio Romo gets those pitches called quite often. But not in the most important at-bat of this game, unfortunately. Good umpires usually aren't going to give an inch in a spot like that. The lasers had it as a ball, and I'll defer to them there lasers.

The at-bat to Evan Gattis was just as illuminating: 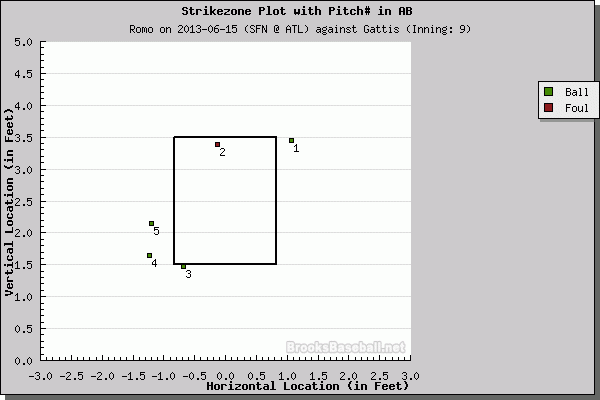 The difference between Romo's best and Romo's b-sides? About an inch or two on those last three pitches. I'm not sure if Gattis would have taken them if they were an inch to the right, but they were close to being impossible sliders. Mix in an error and a bloop, and those inches were the difference. At no point did it feel like the Giants were going to lose this game. Those are the ones that pull your esophagus out.

It would have been so, so nice if Chad Gaudin could have had another outstanding start. Now that the fringe arms like Cain and Bumgarner are coming around, it would have been nice for an established horse like Gaudin to back that up with his typical ace-like performance. Also, I just started following baseball last month. But I was looking forward to Gaudin doing it again.

I was pretty clear that he didn't have his best stuff or command, though. He was about a mile per hour slower than he was in his last start, and two slower than his first start against the Cardinals. He would miss over the plate, and if the fences were about five feet closer (or the temperature about five degrees warmer), he would have been knocked out of the game before the fifth inning. There were a lot of well-struck fly balls against Gaudin.

Which makes it odd that Bruce Bochy expected more than five innings from Gaudin. He was probably hoping for six as a best-case scenario once it was clear that Gaudin was getting by on guile and good fortune. But as a risk/reward situation, here's what Bochy was facing:

That's not an obvious decision. The Giants don't have a day off for a while, and dumping those innings on the bullpen isn't a decision free of consequences. Add in that the Giants had a three-run lead, and it shouldn't have been a reflexive decision. With anyone else on the mound, I'd almost err on the side of the starter going as many innings as he can provide.

This wasn't anyone else on the mound, though. This was a fill-in starter having an iffy outing. The Giants were fortunate that he had allowed just two runs to that point, and I don't think anyone would dispute that. He wasn't missing bats (zero strikeouts) against a team that swings and misses at every other high-five in the post-game celebration. He got through five, and when his spot came up to bat, there was a runner on third base. In retrospect, the Giants would have been much, much better off pinch-hitting for Gaudin there.

At the time … well, I know I was arguing for it, but it's not the kind of manager boner that makes you swear a lot. Just a little.

It also would have been neat if the umpires had called the game right the entire afternoon, but now we're just nitpicking.