Will the Giants trade for Ricky Nolasco? It's probably their destiny to have him at some point, but I'm not so sure this is the year ...

The Giants haven't received the best starting pitching this year, and this under-the-radar story has led some of the rumormongers to suggest the Giants are actively looking for starting pitching. After invoking the name of Sidney Ponson to ward off friendly spirits, Danny Knobler offers this:

Baseball officials who speak regularly with Giants decision-makers say they're already looking hard at the trade market in search of a starter.

"Anybody that's trading pitching, they're on," one of the officials said. "They want somebody quality."

As opposed to all those years when they would call teams and ask for their worst players as part of a fraternity hazing. But I don't doubt the legitimacy of the BOWSRWGDMs. It's not hard to see the Giants looking for a starting pitcher this trade deadline.

Quite a few starting pitchers could be available, including Cliff Lee (almost certainly too pricey for the Giants), Matt Garza and Josh Johnson. But Garza and Johnson would both need to prove they're healthy, and Giants general manager Brian Sabean has tended to shy away from players with health issues.

The Giants are looking for good pitchers who aren't broken. Well, say, that's not a bad strategy. David Schoenfield adds a couple of names:

Ricky Nolasco of the Marlins, Matt Garza and Scott Feldman of the Cubs and Josh Johnson of the Blue Jays. All are impending free agents.

Anthopoulos: So you want Josh Johnson?

Anthopoulos: We would like one of Kyle Crick, Clayton Blackburn, Chris Stratton, or Martin Agosta.

Sabean: No, thanks. Not for a rental who gets hurt every year.

Anthopoulos: But you do want Josh Johnson, right?

Anthopoulos: We would like one of Kyle Crick, Clayton Blackburn, Chris Stratton, or Martin Agosta.

Anthopoulos: Okay, but if the price is right, would you like Josh Johnson on your roster?

Anthopoulos: We would like two of Kyle Crick, Clayton Blackburn, Chris Stratton, or Martin Agosta.

Because pitchers like Garza and Johnson will move if their teams want to move them. And they'll move for second-tier prospects -- good-not-great prospects with a healthy measure of upside. Here's the problem for the Giants, though: Their first-tier prospects are second-tier prospects in a healthy system. A top-15 system would have guys like Crick (brilliant arm, no command), Blackburn (brilliant command, lower velocity), and Stratton/Agosta (high picks succeeding a level below where they were expected to start the season) in the top-10, but not near the top.

The other problem: trading for a rental pitcher would be some serious credit-card spending for a team that is going to have at least two rotation spots to fill in the winter. Long-term resources out, short-term gain in. And in three or four months, they'd have to find another starting pitcher anyway, but with one fewer prospect.

Here, I made a flow chart: 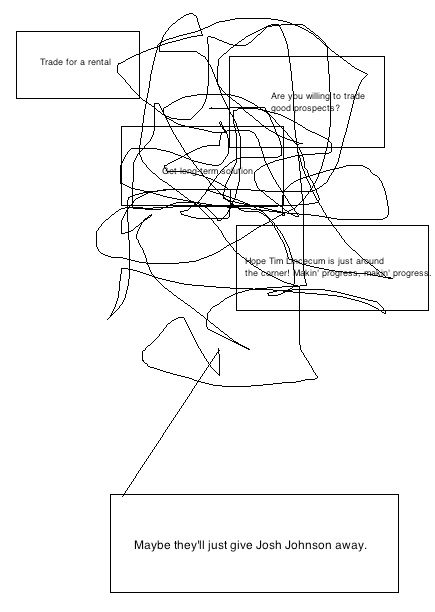 So the Giants are probably going to look for a starting pitcher. And they might give up peanuts for Feldman, or I might be overestimating the price for a busted, expensive pitcher like Garza. But if as many teams are looking for pitching as usual, I'm not sure how the Giants stay in the pitching market.

They'll try, though. And that's encourascary.

Also, I'm pretty sure Ricky Nolasco is good for the first time in five years, which probably means he's bad. Stop that.