Share All sharing options for: Five notes on the ridiculous Pablo Sandoval

Pablo Sandoval is a gift. A jolly, jolly gift. His home run on Tuesday night was the longest home run by a Giant this year, and … aw, heck, let's watch that again:

That home run proves my long-held thesis of "Don't pitch Pablo Sandoval there." For example ... 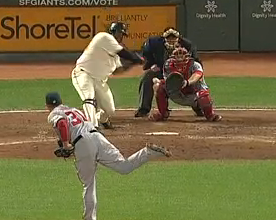 The one on the left was a dinger. The right was a double. Neither one should have been hit well. So, smart guy, where should teams pitch him? The Internet has answers. And these answers provide me with the Five Greatest Things About Pablo Sandoval-Related Pitch Data.

1. The greatest heat map in the history of heat maps

Courtesy of Baseball Prospectus, here is Pablo Sandoval's average against right-handed pitchers when the outcome of his at-bat is decided:

I can't … It's just … that is so beautiful and hilarious. Again, that's batting-average against from the catcher's perspective, so picture a lefty-swinging Sandoval with his back to you over on the right side of your screen. The place you go in the strike zone is in on his hands but, for goodness sake, don't go too far in! If you miss outside the zone and come close to hitting him, he kind of rakes those pitches. Which doesn't make sense. But, hey, neither does Sandoval.

2. That same chart, but by slugging percentage

So Sandoval can't really catch up to the Benard-high fastball … but when he does, he hits them 400 feet. And look at the numbers by his ankles. That's an .838 slugging percentage just under the strike zone, and an .821 slugging on the shoe tops.

3. Those charts don't include the ones that are really outside

The charts are "outside edges to scale," and if you futz with the drop-down menu, you get an option that reads "outside edges infinite." I asked BP's Ian Miller what that meant:

To scale: outer edges are 1/3 the width of the plate/strike zone

Infinite: those pitches PLUS the ones that would've hit the Durham Bull

And if you adjust the chart to infinite …

The average in the two bottom-left corner squares goes up.

4. Over the last two years, left-handed Pablo Sandoval swung at curveballs that bounced on the mound

This is from the catcher's perspective again

Those blue dots must be umlauts or something. I think the guy who runs TexasLeaguers is from Slovakia. Yeah, that's it. Because there's no way those are swings.

Now go back up to those heat maps and look where Pablo has most of his success. Low pitches. It makes absolutely no sense.

One last chart. This one has the frequency of the different pitches Sandoval sees:

I've been playing around with this data all morning, and I feel like there's something even more ridiculous that I'm not seeing, right under my nose. Until I figure out what those things are, though, here are five ridiculous things about Pablo Sandoval. Turns out he's kind of a freak.