You've seen enough Sandoval at-bats that I'm not telling you anything new. And yet you know that highlighting the bad outcomes -- each of the at-bats highlighted in that BP piece ended in an out -- doesn't get to the whole story. Sometimes you swear Sandoval can hit anything. Sometimes you think he's better on pitches out of the zone, and the way to get him out is to throw something down the middle. Space and time seem irrelevant; Sandoval is merely theory, not physical. And I've got a spreadsheet here in front of me that says you're absolutely almost correct.

This spreadsheet shows every pitch Sandoval has swung at since the Giants called him up in 2008, and it also tells me whether each pitch was in or out of the strike zone. This is the precise strike zone, not the fuzzy grey box on Gameday. This strike zone (thanks to my smarter colleagues at Baseball Prospectus) is normalized to reflect the zone that umpires actually call. It's also adjusted for different ballparks' PITCHf/x calibrations. This spreadsheet lists the nearly 2,000 balls that Sandoval put in play over that period of time.

Of those, 42 percent came on pitches outside the zone. And here is how often those batted balls led to all the important outcomes: 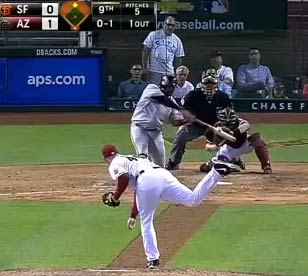 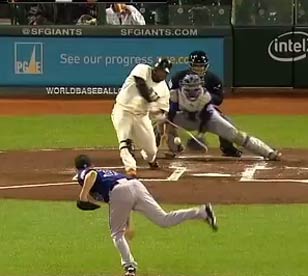 What I really wanted to get to was the wildest pitches on which Sandoval has homered in his career, and so let's do that. The pitches are interesting; Sandoval is interesting; the pitchers, though, are my favorite part, with their assorted tics of exasperation. Understandably so. You follow a recipe and you don't necessarily expect the meal to turn out perfect, but you also don't expect the meal to kill you, or hit a home run off you.

Opposing announcers' disgust at Sandoval, on a scale of 1 to 5: 1. "He went down and got a breaking ball, about [cut off]"

Opposing announcers' disgust at Sandoval: 4. "If he misses it, it probably hits him on the back foot."

Opposing announcers' disgust at Sandoval: 3. "Boy this guy's something else."

Opposing announcers' disgust: 4. "Waaaay down around the ankles. ... A breaking ball down and in and that's exactly where Hernandez called it."

Opposing announcers' disgust: 5. "You know, you just don't think this ball is gonna get hit out of the ballpark. You made the pitch you want to make. If you're Tyler Chatwood, you put the ball EXACTLY where you wanted to put it. Look where this pitch is contacted!"