Share All sharing options for: Giants throw balls all over Coors Field, lose 10-9

They can sure hit, though!

Okay, the defense, then. That's the lede. It was almost a year ago to the day that the Giants' defense was a big deal for the wrong reasons. I don't ever remember using the word "mittfuckery" before. This is a family site! But something happened last May that made me snap and push the naughty-word button. By the end of October, the defense was supposedly one of the reasons the Giants were playing on national TV.

I get the Pablo error. He made a tough stop, tried to throw from his knees. The Scutaro error wasn't the easiest play in the world, thought it's exacerbated by him looking like Aubrey Huff at second for the past month. The Bumgarner error happened because throwing to second base is the toughest thing to do in professional sports. Just ask a pitcher. I don't know what it is about that play, but it's uncanny how awful it turns into a tire fire.

The Angel Pagan throw was nonsense. It feels like Pagan is an expensive new piece of first-generation tech, and we're all waiting for the patch to come. He doesn't play that unhinged all the time, does he? We spend so much time poking fun at Hunter Pence's creep-stare, but Pagan has the same eyes, and he also has a penchant for acting like a 5-year-old jumping on his bed in his first Spider-Man costume. Just calm down, buddy.

Add it all up: mittfuckery. Again. You know the saying. "April showers bring May mittfuckery, which leads to November parades." So maybe this isn't so bad after all. But whenever the troika of Sandoval/Scutaro/Pagan would like to stop making errors, I think we'd all be fine with that. They don't even have to ask us. Just stop, seriously, we're cool with it, no questions asked. 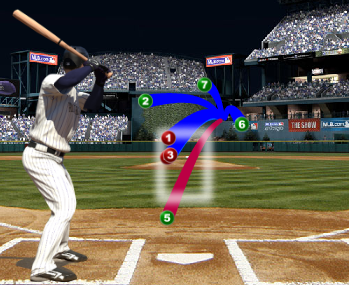 That was the sequence from a 23-year-old creeping on 100 pitches in the fifth inning, laboring through errors and hits. Bumgarner walked the bases loaded there. Look at the pitches. Up, up, up, up, up. Sliders, up. Fastballs, up. Nothing where it was supposed to be.

What would make a manager stick with that pitcher?

Mercifully, Bruce Bochy didn't actually say, "I wanted to get him the win." If a pitcher gives up five runs and walks the bases loaded on 100 pitches in the fifth, he doesn't deserve the win. Even if pitcher wins weren't stupid, which they are, they're not a birthright. But it wasn't about the win (at least on the surface).

Bochy, leaving Bum in: "It backfired. ... Sure those are tough calls. They were his runners. I was gonna give him a chance to get out of it"

It was still a nonsensical reason. "His runners." "Give him a chance" to get out of his own mess. There will be times when this kind of bootstrappy tough love is appropriate. After up, up, up, up, up in Coors Field to load the bases? That's not the appropriate time. Bumgarner walked DJ LeMahieu to load the bases. LeMahieu's career-high in walks at any level is 29 (in the Florida State League), and it took him 600 plate appearances to get there. Bumgarner is one of the better control-pitchers in the majors. When the latter walks the former, it's because something is malfunctioning.

Second-guessing a manager is an American tradition, even if it isn't justified. This isn't even second-guessing, though. This is first-guessing of the highest order. This is something Bochy probably regretted the second he turned his back on Bumgarner. Don't listen to pitchers, Skip. They're all liars. Even if Bumgarner got the last out, it still would have been a bad decision.

Rafael Betancourt is one of the most fascinating pitchers in baseball. He has hit one batter in his career, mostly because he works the outside exclusively.

That's from the catcher's perspective. A left-handed hitter could put his toes on the plate and approximate a normal strike zone. Away. Always away.

So if I know that, and the hitter knows that, why is Bob Davidson so easily duped? 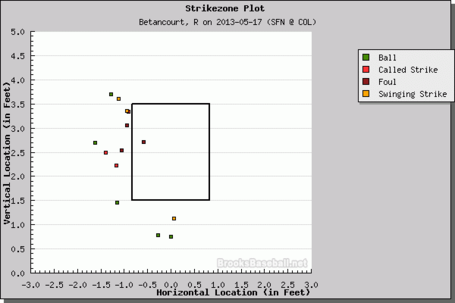 Betancourt threw one strike in that inning. And when the foot off the plate was called, that set up everything that followed. It made Gregor Blanco chase up. It made Brandon Belt lunge out and protect two feet off the plate.

The Giants lost this game on their own. But that doesn't mean you still can't be annoyed at umpire buffoonery.