I asked Tim Lincecum what he needed to work on before spring training. Now it's time to see if he accomplished anything.

Spring training is, of course, the time for optimism. Like New Years Day, it's also the time for pronouncements. 'I'm going to learn that changeup finally,' 'I've got a new grip on my cutter,' and 'I'm going to steal more' might only be a rung or two above 'I'm in the best shape of my life,' but at least they offer us a little more window into the gears and bolts of trying to better yourself in baseball.

If any Giant needed a fresh start, and a new *something* after last year's dream run, it was Tim Lincecum. And, since it wasn't 'I'm going to be the closer,' it probably had something to do with his pitching mix.

"I feel like I'm going to have to think my count a lot more, and that will determine whether or not I need to throw pitches on the edge, or not be too fine," Lincecum said to me at Media Day this Spring, not a minute after admitting he was more motivated this year. Can't test the motivation, but we can test to see if his pitching mix has changed in different counts. 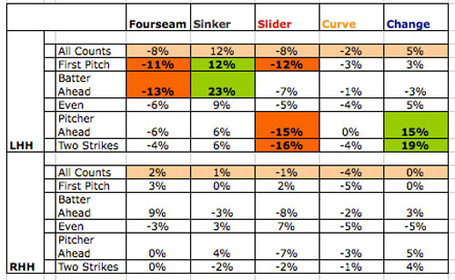 When Tim Lincecum needs a strike this year against a right-handed batter, he's reaching for his sinker more than his fastball. Significantly more. His slider and curveball usage is down across the board, with the slider getting the heave-ho more often. That's interesting because by FanGraphs' pitch-type values -- admittedly a results-based metric that only tells us what happened after the pitch was thrown without any context -- the curve has lagged well behind the slider in effectiveness over the years. The slider is also still getting more whiffs than any pitch other than his changeup... But it has the worst called strike rate of any pitch save his changeup, too. Perhaps we'll see him use the slider a little more when he's ahead against a righty in the future.

But when a pitcher that has struggled with control consistently reaches for a different pitch when he needs a strike, it says something: Dissatisfied with his ability to control the four-seamer, Tim Lincecum has decided to try to use the sinker to get strikes.

Again, weird. Because the sinker has gotten more ball calls than the four-seamer this year (46% to 37.1%) and last year (42% to 36%). In fact, the four-seamer has always been in the zone more than his sinker, even if both are consistently in the zone more than any other pitch in his arsenal. Also, weird because of the other thing Tim Lincecum told me this spring: "The biggest pitch, the thing that is going to help everything, is fastball command."

But let's say he meant 'fastball' in the general sense, and that the sinker is a fastball to him, and he's found that he has more command of the pitch even if he has less control over as defined by the zone percentage. Command is a tricky thing, but Jeff Zimmerman and Bill Petti might have found a proxy in Edge%, or the percentage of pitches a hurler manages to place on the outside edges of the strike zone. Those are the best pitches in the game, of course, and being able to consistently put a pitch in that sliver of the zone could very well be a proxy for command.

Jeff Zimmerman already pointed out that Tim Lincecum's Edge% has fallen over the years. He tells me that overall, his Edge% is once again bad this year. But then I asked him for the Edge% per pitch. He obliged:

To recap: Tim Lincecum's control went kaput last year. This offseason he made fastball command a priority, Now he's eschewing the fastball for his sinker in moments where he needs a strike. This despite his fastball usually living in the zone more than any other pitch. Heck, he even has better command of his slider, and he's using that less this year, too.

And his four-seam fastball has the best Edge% of his career right now.

None of it makes any sense.The fastball is the pitch built for command. He's lost velocity on the pitch, and velocity is inversely related to movement, so you could argue that perhaps he's not used to a slower, movier fastball. Except his fastball is not moving more, and he's had a couple years now to get comfortable with the reduced velocity. If the fastball wasn't working for him, it makes sense to try other things, but the sinker seems ill-suited for this new role he's given it. Even the slider would be better for him.

After all of these words, he's still right. It's still about his fastball command, even if -- by one measure at least -- he's showing the best fastball command of his career.

Of course, Tim Lincecum said he used team trainers this offseason for the first time, in an effort to get stronger. Not necessarily bigger -- but not "180 pounds soft," either. And he agreed that the hair was holding him back.

So maybe we have no idea what's working and what's not.