Share All sharing options for: Giants win, out-Coors the Rockies

We've seen that game before. That exact game, played out in full several times. Home team falls behind. Home team gets a three-run homer, and then every hit falls in after that. No matter who comes in from the bullpen, the odds are great that he'll be shaky. Nothing works for the visiting team after they jump out to the big lead. Everything comes up Milhouse for the home team after they catch up.

Usually, though, those games are played in Denver, and the home team is annoying. This was a classic Coors Field win for the Giants. Even though an opposite-field homer at AT&T Park should count for twice as many runs as one in Coors, Brandon Crawford's ball had that same that-isn't-really-going-out-is-it? quality that the worst Coors comebacks have. The Giants outdehumidored the Rockies.

Games like this in the regular season, when you slump in your chair after three innings and ask yourself over and over and over why you're still watching. There are better things to do. Change it. Change the channel. There might be one of those shows where people look for houses on HGTV, and you never know when it'll be on again. Change it.

Yet from the Troy Tulowitzki homer on, the Giants looked like the best team in baseball. It was a slow con, and we all fell for it. But it turns out that was a perfectly enjoyable baseball game. Of course, these kinds of wins are rare. An example of just how rare:

After Brandon Belt grounded out to end the fifth, the Giants had about a six-percent chance of winning the game. That's a six-percent chance for an average team to win in a neutral park against an equal team. The win expectancy doesn't take the cold, oppressive air into account. It doesn't care about 420 feet to Triples Alley. It doesn't factor in the chills a player gets when he locks eyes with a seagull that hasn't eaten in a month. So it's even more impressive that the Giants came back.

They'll do it a couple times out of every 100 chances, they will. So appreciate it when it happens.

If you're wondering if the Giants scored nine runs or more in a game at AT&T Park last year, they did it six times. Half of those games were against the Rockies. So maybe this isn't as anomalous as you might have thought. But to do it after falling behind at home ... that wasn't something that happened a lot last year.

Wait, say, that was a Tim Lincecum start, wasn't it? Suppose we should talk about that. He allowed four hits in six innings! Good for him, good for him.

I find it impossible to believe Lincecum could have won two Cy Youngs without ever knowing where the ball was going. That's a working theory, you know -- the difference between then and now is that his stuff used to be much better, which made up for a complete inability to pitch to the catcher's mitt. And I can't buy that. Which means that at some point, Lincecum changed from a guy with good command to one who ate Jonathan Sanchez-dusted mushrooms. How or why? No idea. But Lincecum doesn't walk Juan Nicasio to load the bases in 2009. This year's model can't help it.

In 2009, Lincecum throw at least 60 percent of his pitches in the strike zone in six different outings. He's been over 50 percent three times since the start of the 2011 season, never coming close to 60 percent again. He has no idea where the ball is going. That isn't arm trouble. That's mechanical malfeasance, and he's probably screwing himself more into the ground with every outing.

Says here that his release point is off so far: 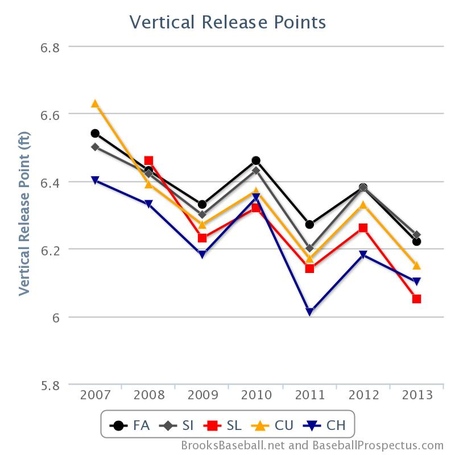 Welp. Next time, Timmy. Still believe the mechanics are going to set like a broken bone one of these games, even if that's pretty foolish by now.

Hector Sanchez walked twice. Feels like we should send him a case of Zagnut bars or something as reinforcement. As a reminder, he was a noticeable prospect in the low minors because of his high OBPs.

Same thing goes for Brandon Crawford; if he could work in walks and/or more of these home runs, he'd start to be a pretty exciting player.

Hey, the bar is low for catchers and shortstops. The bar is looooow. They both looked excellent enough tonight to make you daydream just a bit.