A final word on Hector Sanchez and Tim Lincecum

Until the next word.

Share All sharing options for: A final word on Hector Sanchez and Tim Lincecum

Sam Miller worked up something amazing on Hector Sanchez's pitch framing, which is exactly what I was going to do before Lincecum's next start. Well, I was going to work something up. The odds are good that it wasn't going to be amazing. So it's probably better that Miller did it, and if you haven't read it, go now.

It's going to be a long season. Hector Sanchez's pitch framing and defense is going to be a topic for the entire time. And I like Hector Sanchez. I'm not anti-Sanchez. Some of my best friends are catchers who need more time to develop their defensive skills in the minors. But I wanted to look at this one more time.

I'll borrow two things from Miller. The first is the pitch chart from Lincecum's first start, where Miller was kind enough to circle all the instances of Lincecum throwing pitches that were strikes but called balls: 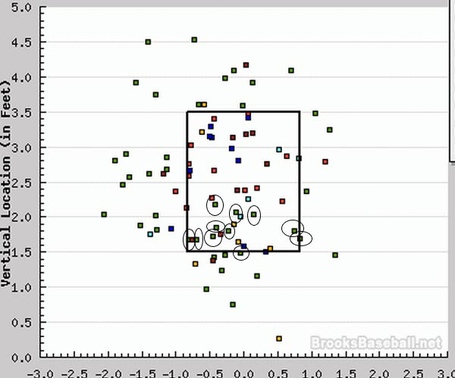 The other things I'll borrow are all of Miller's conclusions and "words." He looked at the pitches that weren't called strikes, and he made the appropriate GIFs.

It's never easy to say who gets the blame for these pitches being called balls. Was it Lincecum, for missing his spots? Lincecum did miss a lot of spots, but most pitchers do, and part of what we judge good catchers on is their ability to catch those pitches quietly and sturdily. Was it umpire Bruce Dreckman? Certainly, the rulebook doesn't say anything about the catcher's target, or ability to receive a pitch, affecting the strike zone, so in a sense yes, it's his fault that pitches in the strike zone weren't called strikes. But teams don't get to take moral stands on this issue; they need to work with the umpiring culture that actually exists. And Dreckman has been a fair, perhaps slightly pitcher-friendly umpire in his career.

Was it Sanchez? A lot of it was probably Sanchez.

Tim Lincecum set a career high for walks last week, which is quite a feat for a pitcher who can be a little on the wild side to begin with. And during this career-worst performance, Sanchez made a lot of obvious flubs when trying to frame pitches. Conclusion: Hector Sanchez is the wrong catcher for a pitcher who needs every break he can get.

Except I guess that brings up another question: Is Sanchez always this bad? Also, how does he compare with Buster Posey when it comes to strikes not getting called?

There isn't really an easy way to figure this out -- no Play Index-type search that tells you in a few seconds. If there is, please, please, please don't tell me about it until tomorrow. Because what I did was went through the Brooks Baseball logs since the start of 2010 and tallied up the uncalled strikes in all the games in which Posey caught Lincecum, and then I did the same for the games with Sanchez catching Lincecum. There's no real elegant way to do it -- I just looked for green boxes in the middle of the rectangles and counted away -- so these numbers aren't official.

Repeat: These numbers aren't official. They are quite unofficial. But I majored in finding green boxes in rectangles at San Jose State, so most of this stuff is probably okay.

And then Hector Sanchez:

This sounds pretty damning, but Lincecum has thrown balls about 37.2 percent of the time over his career. By my math, which is awful, that's about one uncalled strike for every 100 pitches thrown. That can be big if the uncalled strike is in the wrong spot at the wrong time. But it's still one pitch out of every 100.

1. Sanchez's last outing was especially bad when it comes to strikes being called balls

2. However, it wasn't typical, even for him

3. If you want to give Lincecum every advantage possible, Posey is the best bet

4. However, it's not a huge deal when it comes to balls that should be strikes

5. This did not look at close pitches -- balls that could have been called strikes with better framing. If you add in the benefit of a strike-thief like Jose Molina or Jonathan Lucroy, it would make a pretty big difference.

6. Small samples ahoy -- even though we're talking about thousands of pitches, there is still a lot of room for noise.

If I have messed up the math, feel free to correct and/or laugh at me. But there's a chance that by focusing on the last Lincecum/Sanchez outing, we're essentially evaluating a hitter after a five-strikeout day. Sanchez isn't exactly good. But he's not usually that bad.