Closer Strikes Out the Side, Vol. III

Share All sharing options for: Closer Strikes Out the Side, Vol. III

Has it really been this long? The last time we were here, watching moving images of a closer striking out the side, Sergio Romo wasn't even the closer. The last time a closer struck out the side in a save situation, it was Santiago Casilla against the Reds last April. You can double-check my work, but I just had 21 tabs open to box scores of Giants wins that ended on a strikeout.

Let's keep the tradition alive, then. When a closer for the Giants strikes out the side, it gets sent through the GIF conveyer belt and comes out a large file on the other side. The good news is that SB Nation doesn't load GIFs automatically anymore -- you have to hover your mouse cursor over them to get them to run now -- so everyone can enjoy this thread, even the people with a megabyte of RAM on a computer still running Netscape 6.

Last night, Sergio Romo struck out the side. He is a closer. To the GIFs:

A swing? Maybe. A swing that the home-plate umpire should call himself? No way. But calling that a ball would have delayed the inevitable; Nelson wasn't picking up that slider at all.

Not a strike! The red guy to the right of the box here: 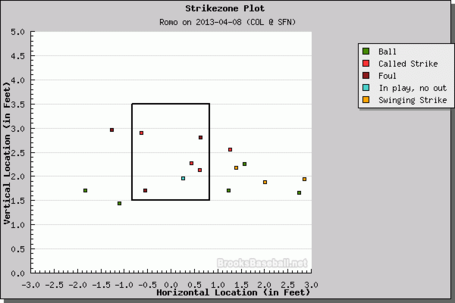 Not a strike. Not especially close. But here's the thing: It was Todd Helton. I would ring Todd Helton up on pitches far worse than that just for his goatee, much less what I would do because he's an annoying human being. This is why I would be an awful umpire. You'd approve, though.

That's the best 157-frame description of Romo you can make. The ones where he makes people miss by three feet -- hellooooo, Rickie Weeks -- are great. But those are still an anomaly. The swing-and-miss by Rosario is much closer to the standard Romo strikeout. Thinks it's going to be here, but it's there by three inches instead.

Romo's off to a great start. He'll eventually blow a save because (almost) all closers do at some point. Until then ... look it that slider go. Wheeeeeee.