It's guest-host week at McCovey Chronicles! Up next is Michael Clair, whose Twitter account and website are must-follows. Dude had a baseball card with a mustachioed Will Clark and his dog a couple months ago. Come on.

When Grant kindly asked me to help cover for him while he devoted his time and energy to his new child, my first instinct was to say "No." Because if there is one thing children appreciate, it's a father with a killer work ethic, one who won't turn away from the internet at the slightest "birth" or "important life moment." But then I realized that this would be my time to shine, to talk about the player who should have been the greatest San Francisco Giant of all time: Steve Stone.

This is the same Steve Stone who pitched all of two years for the Giants before arm troubles sent him to the White Sox, Cubs, and, where he would find his greatest success, the Orioles. But what elements, present during his Cy Young campaign with Baltimore, were missing from Stone's repertoire when he was with the Giants? The answer is witches and pancakes.

Stone, a 1969 January draft pick, joined the Giants as a 5'10" right-handed hurler, coming after a successful high school career as a tennis, volleyball, and ping pong champion. Take a peek at Stone's oozing masculinity when poured into this tennis outfit for a 1983 Playgirl photo spread and realize, yeah, the dude's a champion: 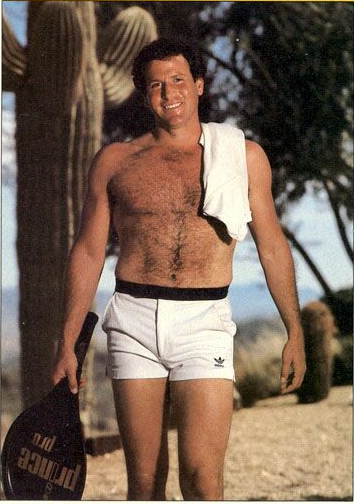 Billed as the next great Jewish starting pitcher after Sandy Koufax by both the Giants and his mother, things never quite worked out for Stone, perhaps because of injury or perhaps, as manager Charlie Fox claimed, Stone "read too much and smoked a pipe."

For whatever reason, after two years with San Francisco, splitting time between the bullpen and rotation (11-17, 3.53 ERA, 234.1 IP), the dreams of a Bay Area Koufax faded and so the Giants sent him to the White Sox. Stone hung around both Chicago teams for a few years before eventually finding his way to Bubbles' hometown of Baltimore, MD. (Speaking of, how the hell has there not been a FOX drama about a troubled-yet-sexy doctor named Todd Baltimore, MD?)

It was there, ushering in humanity's greatest era, the 1980s, that Stone won his Cy Young award, going 25-7 with a 3.23 ERA in 250.1 innings. But what changed him from mustachioed wine connoisseur to Major League celebrity? Some, like manager Earl Weaver, credited Stone's curveball, a pitch he would use up to 75 times a game. For comparison's sake, A.J. Burnett lead the league in curveball use last season, throwing the pitch 34.1% of the time. However, the real reason for Stone's emergence is so much more logical than all that.

The true thrust behind Stone's success was twofold: on one side, there was a psychic, the other, breakfast foods. The mystic, Ruth Revzen (these days known as Ruth Lordan, now spending her time tweeting to Donald Trump), was a magical "white witch" already known in Major League circles. Revzen claimed to have helped the Cubs while Stone was with the team, directing her energy to disrupt a Randy Jones start and providing Ron Cey with a powerful custom perfume/potion, unlike the generic Love, Success, Enlightenment and Goodness perfumes that she sold at Bendel's department stores.

Revzen, her work with the Cubs complete, soon came to Stone's aid, the evidence of her abilities stemming from telling Stone when to go to the dentist (before he even knew there was something wrong!), getting his car repaired (before he even knew his car had a scratch!), and finding him in a restaurant (when she didn't even know he would be there!) If that's not proof of true psychic skill, of someone peeling back the veil between the two worlds, nothing is. After further work with Stone, setting him up with his own scent and possibly going full-Carrie on a stadium transformer when Stone's arm was tight before a scheduled start, he bought completely in, adding a faith healer and a hypnotist to the package. It's like with cable, internet, and TV -- you get a deal if sign up for all three.

But for the handful of things that the white witch couldn't do, Stone turned to the lumberjack's greatest source of nutrition: pancakes.

For Stone, a food-loving gourmand and part owner of the terribly named "Lettuce Entertain You" restaurant group, (some of the restaurants under the banner included Lawrence of Oregano and Jonathan Livingston Seafood), flapjacks were the main source of gameday strength. Like chicken for Wade Boggs or Taco Bell for Justin Verlander, before every start, Stone would dine with sportswriter Peter Pascarelli, shoveling the gooey, carbohydrate-laden dish into his open maw, surely feeling the awesome power surge through him like a diabetic Popeye. And while I can't manage to do much after eating pancakes beyond lay in pajamas, legs akimbo and mouth agape, the one time Stone had steak and eggs before a game during his magical season, he failed to last five innings against the Minnesota Twins.

Sadly, because the calculations for WAR are closely guarded, we don't know how much pancake-eating and psychic transmissions are factored in. However, if we make the conservative estimate that those variables were responsible for roughly 50% of Stone's 1980 performance, had he only utilized those two sources at the beginning of his career, Stone would have won nearly 400 games with a sub-2.00 ERA, striking out close to 12,000 batters. But math never was my strong suit.

Sadly, the lessons from Stone's career have been lost on the greater baseball world. While improvements in training and medicine have enabled athletes to ever improve, as far as I know, no current clubs have turned to dental-work-predicting psychics or have hired pancake chefs at every level of their minor league system. And while the Giants have done a great job developing starting pitchers, just imagine if they had a Ruth Revzen guiding the club, or a pancake-engorged Matt Cain on the mound. Nothing short of the destruction of the world could stop that team.

(Additional information from The Baseball Astrologer by John B. Holway)