There was a lot more to this game than that, of course, but those events were certainly the most remarkable. In other news, a baseball to the groin lacks 100% of the comedy that a football to the groin has.

Grant Brisbee is away on paternity leave.

By the time Bruce Bochy had been ejected, Brandon Belt had already made his mark on the game. The fact that he was able to step up again -- after Matt Cain had lost a 3-0 lead -- and deliver yet another big hit that put the Giants up for good could certainly be viewed as a middle finger to his manager for batting him eighth. On the other hand, batting Belt eighth could've been another way of Bochy challenging the streakily-mechaniced, awkwardly-constructed hitter in order to bring out the best in him.

It's a lot more fun to foist a narrative onto things like that because the numbers are incomplete. They don't show how Belt looks great than terrible from virtually pitch to pitch. Tonight, Belt was on, and I suppose it's not all that important to understand *why*, because there's a very good chance that not even he understands it. Hitting him eighth certainly has, from the outside, the look of a manager punishing a player, but at least he didn't bench Belt, and at least Bochy hasn't seemingly bent over backwards this season to bench him (yet). Maybe there was something freeing for Belt in hitting eighth. "Hey, I'm still starting," he might've thought, and that thought could've caused him to *relax*, which very well could be the single biggest issue facing him.

From my bespectacled view it looked like he was able to track and get on top of an up-and-in fastball that didn't get "up" enough and was more "middle" than "in". Normally, Belt doesn't hit that for a home run. Normally, he swings through it.

Later, Brad Ziegler kept pitching Belt away, away, and away. It was probably a big mistake pitch selection-wise to stay out there, because Belt was primed to look low and away, and when he finally got one in the strike zone he was able to stay on it and make solid contact. Normally, he pulls off that or swings through it. Sometimes he even watches it go by. Belt was the Belt we expect tonight, and I don't think we can truly understand why. I'm sure we desperately want to know what was different about tonight so that we can, I don't know, collectively wish that to be the case every night so that he can hit like this every night. That'd be nice.

And I'm sure we'd like to know what led to Marco Scutaro to having such a nice game, not 24 hours after the bandwagon started to creak slowly turning against this aged blockbuster. I threw a Freddy Sanchez bat speed comp on him this afternoon and look what happened? That shut me up.

Part of my thinking, though, was that if Scutaro's really hurting *and* he's been slumping *and* the Giants' have a viable backup in Noonan, then why not rest the old guy a couple of days? All of my thinking was de-pantsed tonight. I feel like the logic is sound, but in the face of a multi-hit game I know better than to push the matter.

How about that Nick Noonan, though?

How about that Hunter Pence tho

Okay... no more dilly-dallying. It's time to get down to business. 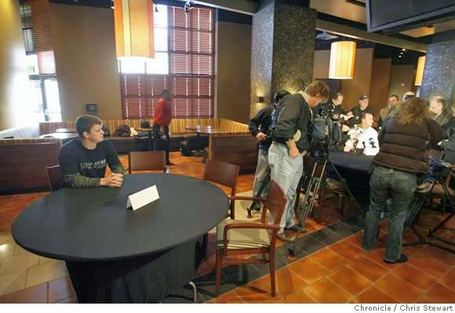 You can't read it, but the card on the table says "April". It's not a TMNT reference, it's a label for this terrible black month (the table) that has ensnared him.

So, those two Philadelphia games are pretty understandable. Juan Uribe hits opposite field home runs there. I don't know what to say about most of those home games, though. I'll chalk up the 2010 game to nerves and Adrian Gonzalez (if you'll allow). And then there's this season.

I don't have one garlaxing clue what's going on with Matt Cain anymore than I know why Brandon Belt's career has stuttered so much. Grant attempted to diagnose him last week and I think tonight's performance actually does reinforce his main conclusion:

But there's no question that, at least in the early part of the season, the ball isn't quite going where Cain wants it, and it's led to the worst month of his career so far.

Oh yeah. That's definitely a big part of it.

That slider wasn't sharp and mostly hangy, the changeup had more loftiness than Downtown LA, and the fastball was pretty straight, in and out of the zone. And Cain's curveball...

Not much more to say about it than this.

Still, could it be an issue of concentration? Matt Cain seems like Matt Calm out there. It's not like he's a man about town or "hard liver". We simply don't know enough about him personally to say what could, if anything, be a distraction to him. He's been pitching in the big leagues for a long time. If it's a matter of concentration that would be a huge surprise.

Might it be some kind of injury? I suppose that's always a possibility where a pitcher is concerned. Pitchers are baseball's "Dad just went out to get a pack of smokes" of talent. But the velocity's there. The stuff is there. The control is there. We've seen that Tim Lincecum is uninjured despite lacking command for a season and a half. And it's not like he's bad from first pitch. It really is one or two bad innings that knock him out. Injury is always a possibility, it shouldn't be wholly discounted, but it seems unlikely.

Then what about his age? I like this idea because getting old sucks. Being an athlete and getting old, then, has to double suck. Flexibility, balance, memory, all the senses, everything just declines as we age. Maybe there's five pesky pounds causing some uncomfortable (and new) cup chaffing, and Matt Cain's just totally annoyed by it (though that would fall under concentration, I suppose). Age hasn't slowed his fastball or anything, but maybe age just makes it a touch more difficult to repeat delivery or just make one feel different even while doing something they've done literally a thousand times before. Getting old sucks.

Predictability can be just as aggravating as age. There's a chance that Cain has become oh-so predictable to the National League and this could all be a pitch selection thing. It certainly looked like Prado was waiting for a hard fastball in when he hit his home run. Maybe Matt Cain needs to do something to spice up his marriage -- I mean reputation.

But it probably just comes down to bad luck. Isn't that what we're supposed to say on the Internet when we don't understand something that's happening in Baseball?

I think we all should just take a deep breath and forget about Matt Cain's April and move on. That's the most sensible thing to do. Ultimately, the Giants have won two of the last three World Series, nobody's going to feel sorry for the team or its fanbase, and if something is terribly wrong with Matt Cain (and the rest of the staff), then it will all have been in service of winning two of the last three World Series. Chewing up arm talent to win a championship is the best case scenario.