Giants swept out of San Diego

Share All sharing options for: Giants swept out of San Diego

For some reason, this game keeps coming up. Scott Hairston games can scar the psyche, apparently. It comes up now because that was the last five-game losing streak for the Giants. And it ended in a much, much more discouraging fashion. So if you want to go into hey-this-stuff-happens mode, you can note that this stuff most certainly does happen, even in the best of seasons.

Show of hands if you're in hey-this-stuff-happens mode. Right. Didn't think so.

Each one is a precious little frustration snowflake, unique and obnoxious in its own way. It would be one thing if the Giants lost every one of the last five games 8-1. No one would be hitting well, no one would be pitching well, and the explanations would be easy enough. The Giants wouldn't be good enough to win in that scenario. They would actively look like the worst team in the league.

Right now, they just look like a sloppy team. An occasionally bumbling team. But a team that should have one a few of those games up there. Not all five, of course. But maybe three. Probably two. Certainly one of them. One measly extra-inning game. Just one of the three, and no one here is quite as dejected right now.

If it's time to put a couple of coins on Ryan Voglesong's eyes and kick the funerary boat down the river, we probably won't know for months. He's earned the benefit of the doubt when he struggles. Dude crawled through miles of Pirates and came out a champion on the other side, so four or five bad starts shouldn't undo everything he's shown the Giants over the past two years. The odds are at least decent that he'll snap out of it and return to being the same pitcher he has been, so the Giants will have to give him the is he/isn't he treatment for the next couple dozen starts.

But it's possible that he's really, really bad now. Hey, I hope not, but when 35-year-old pitchers start leaving balls up like this, it's hard not to think morbid thoughts. Considering that Vogelsong makes as little sense as any player in recent major-league history, it's not blasphemy to suggest he could disappear just as quickly as he arrived. Seven months before he started his second career with the Giants, Vogelsong was released from his second Triple-A team. Seven months after winning a World Series game, Vogelsong is pitching as poorly as he ever did with the Pirates (at least from a runs-allowed perspective.) It's a bell curve with some pretty gross extremes, but the middle was a pretty sweet ride.

I'm optimistic, but that's because the alternatives are depressing. I'm pretty confident, though, that the days of Vogelsong rattling off dozens of quality starts in a row are over. If there's a spectrum of acceptable starters that ranges from Tim Lincecum, 2007 to Barry Zito, 2010, it looks like Vogelsong is much, much closer to the latter at this point.

Maybe Vogelsong hasn't changed at all, but his luck has. That is, maybe his home-runs-per-fly-ball rate really was fluky over the last two years. The classic study about Dave Righetti and home runs looks like it was written in an alternate universe now. Everyone's giving up home runs, even more than expected.

We may be underestimating the park factor, or the Giants may target pitchers who can succeed specifically in their park. There is room for a lot of good luck in there as well.

It would have taken a lot of good luck for the Giants to avoid home runs like they did over the past few years if they didn't have some sort of corresponding skill to prevent them. Watching them pitch this year, though, it's hard to remember how they ever did it in the first place. Dingers, man. So many dingers.

So I guess Marco Scutaro is bad now? Huh. That happened about a season or two earlier than was convenient. Like everyone else on the roster, all it will take is a good week or two to erase all of these April perceptions. If Scutaro goes 9-for-15 in Arizona, His numbers will spike a bit, and he'll stop being a usual suspect.

Like Vogelsong, though, a 37-year-old second baseman doesn't need a lot of reasons or extenuating circumstances to suck. Almost everyone figured the contract was going to look bad in year two or three. But to happen right away? Even those most pessimistic about Scutaro have to be a little surprised.

He did this last year, you know. If you're grasping at straws.

I can't remember where this came from, but I stumbled across it in a random folder this morning. It's a photoshop of Willie McGee and Don Mossi. If they mated, the kid would look something like this: 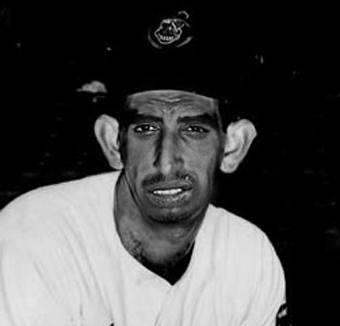 I'm sorry and you're welcome.