I'm reminded of a story.

The Giants lost to the Padres in 12 innings. This was the 15th time the Giants have scored seven runs or more at Petco Park. This was the first time they've lost.

The second time I was ever in a bar, I was with my roommate. He liked to order a shot of Jameson and a pint of Guinness at the same time. Saved the barkeep a trip, apparently. About an hour before closing, he started acting like a jackass -- fresh with the waitresses, obnoxiously loud, and all that. So I folded up the umbrella in my drink and stumbled home. Public spectacles make me feel uncomfortable.

Because this was 1998, I had the Internet on a computer in my house, which was a big deal. I lost myself in the standard stuff. 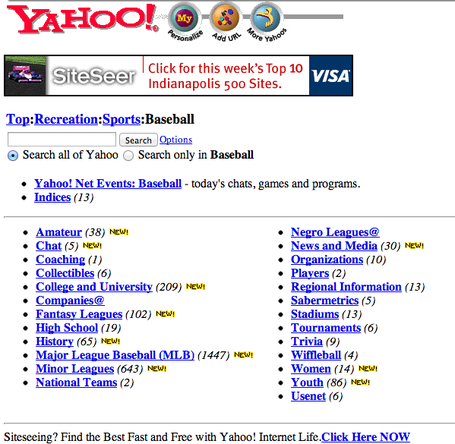 After an hour, I heard a sound coming from outside.

To this day, I have never heard vomiting quite like it. The key to Narnia was at the bottom of his intestines, and the only way we were going to cross over was if he brought the key back to our world. So he kept trying.

After 30 minutes of non-stop, violent retching, there was silence. I went outside, checked his pulse like a good friend, and went back to the Internet. After a few minutes, the door flew open. He stood there for a second, looking pissed that the open door wasn't the last stop in his journey. He bounced from wall to wall until he reached the bathroom. He threw up for another 30 minutes. I kept surfing the World Wide Web.

This was eventually interrupted by my roommate standing in the bathroom doorway with his pants and underwear around his ankles. The kitchen was dark, so the light from the bathroom backlit him, making him look like a creeping monster from a '50s B-movie as he took each step, slowly advancing and groaning. Exactly like something from a '50s B-movie, except this monster had his dingus hanging loose and free. He took two more steps, and then the pants around his ankles did him in. He fell like he was hit with a spear, crumpling on the kitchen floor. He didn't move.

I started to panic. Was he dead? Was I supposed to call 911? I probably should have called 911. But for some reason, my first instinct was to grab him a blanket. It was December, there was snow on the ground outside, and he was probably freezing. When I approached him with the blanket, that's when I smelled it.

While my roommate was vomiting outside, he was also productive. It was a kind of multitasking, now that I think of it, because instead of puking and taking the time to go to the bathroom, he was able to do both at the same time. And when he came into the bathroom, it wasn't just to throw up more; it was to take off his pants and clean himself up. He never got to that last part.

Between the time he fell and the time I returned with the blanket, my roommate crawled just a little bit, clearly marking his journey from the bathroom door to the middle of the kitchen. The stench was unbearable, and even though it was 20 degrees outside, every window and door in the house was kept open for the rest of the night.

When he woke up in his room the next morning, it was because we were banging on his door, telling him to clean up his mess. He didn't remember anything, so he thought we were talking about a spilled soda or something. He rolled over in his blanket and went back to sleep.

He's a successful chef now. That one night didn't define him. He's a great guy, one of my dearest friends. But one night, he pooped his pants, smeared it down his leg trying to take his pants off, and then army-crawled five feet from the bathroom to the middle of the kitchen.

For some reason, I decided to write about this tonight.