What would you do with a World Series ring?

This isn't a sponsored post. Just an honest question.

Share All sharing options for: What would you do with a World Series ring?

The Giants want you to have a World Series ring. Wait, wait, I should probably start at the beginning. There was this baseball tournament, see, and at the end of it, the winner got a fancy ring to symbolize their triumphs. Here’s how the Giants’ describe the ring they want to give you:

Designed and produced by Tiffany & Co., the ring, pictured at left, is crafted to pay tribute to the Giants seven World Championships as well as the unprecedented six elimination game winning streak which led to a sweep of the Detroit Tigers. The face of the white gold championship ring features the San Francisco "SF" logo with 52 round melee diamonds. A bezel reading "World Champions" is highlighted on both the top and bottom of the ring. Seven round diamonds, on both sides, represent the seven World Championships.

The Giants are holding a raffle and you can buy chances to win the ring. A $10 minimum gets you five tickets, and the proceeds go to the Giants Community Fund. You were just going to spend the money renting Taken 2 on demand anyway. He rescues his daughter and/or wife from the wolves. There, now you have money to spend on raffle tickets. And because it's for charity, everyone wins.

Except … look, I'm going to buy a few tickets myself, but there's a burning question I've had for years and years. It kinda sorta applies to the players and front-office types, but not really. Mostly it's a question for you and me. Pretend you won the raffle. You now have a World Series ring.

What in the absolute heck do you do with a World Series ring?

It's not a piece of flair that blends into your regular outfit. It's not something you can slip on to complete an outfit. It's a World Series ring, which tend to look like World Series rings, unless they look like Super Bowl rings. Even if people don't know that it's specifically a baseball-related ring, anyone who sees you wearing a VW-sized bucket of diamonds on your finger knows that it's somehow related to sports.

Employer: It says here on your résumé that you were Jean Machi from August through October?

You: That is correct.

Employer: Goodness, how exciting! You're hired.

That's one way to enjoy a World Series ring, I guess.

Probably the most likely scenario, but you'd have to get one of those oak podium-looking things with a rectangular glass case on top. At least, that's how I picture it. Putting it in a curio cabinet with the jade elephant your Aunt Sheila brought back from Myanmar seems anti-climactic. Keeping it on your desk at work is just as weird. A display would work, but you'd have to have the right kind of house and setup. If I win the ring, it'll probably go on something made from IKEA, and that's kind of weird.

Put it in a drawer and forget about it

You know there would be ghouls who would do this, whether intentionally or unintentionally. It would rattle around the back of a desk drawer with correctional tape and loose Ricolas. That's the kind of thing that kicks off a quest in another part of the world. A young boy and his pet lion would set out from 5,000 miles away to save the spirit of baseball. They may or may not complete the quest by beheading the ghoul who put the ring in a drawer. Don't put the ring in the drawer.

There are probably combinations of the above options -- display it until it's time for the playoffs, or display it until you're going to your daughter's wedding or something. Or maybe there's something we're missing ...

Take the ring with you on a trip around the world and send an illustrated travelogue to Mat Latos from each spot.

It is Day 15 of our trip, and we still have not found the scoundrel who absconded with the second "T" in your first name. Be advised that we remain vigilant. Should we encounter the thief, my plan is to blind him with the reflection shining off one of the inset diamonds on my face. For I am a World Series ring, and I have powers.

I do so regret that we were never meant to be together, so I shall continue my quest to find your missing "T", even if it takes me around the world. I feel it is the least I can do.

On a lighter note, here I am in front of the Eiffel Tower! 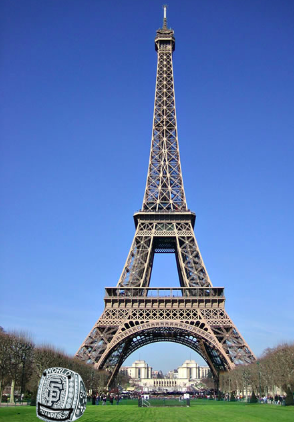 Okay, so maybe that's what I would do. I would get a Kickstarter going, and you would send me around the world so I could troll Mat Latos.

I would also promote the Kickstarter on this site if you won. So maybe we should all buy some tickets. For charity. And trolling.

Comment starter: What would you do with the ring? Like, you have a World Series ring. Now what?