Say, has anyone noticed that the Giants are allowing a lot of home runs to pitchers?

Share All sharing options for: Historical background for the Giants' annoying problem

Look at this followthrough: 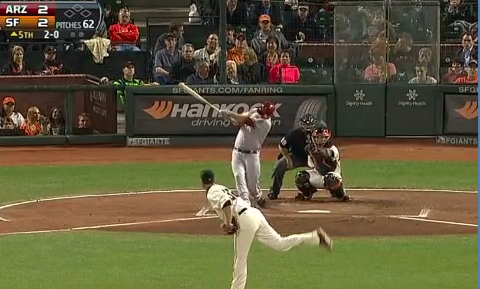 Head nuzzled into his armpit, like a sleepin' kitty cat trying to block out the light. Back foot off the ground because he's a pitcher who doesn't know how to hit. Which is what Wade Miley is. After 100 plate appearances in his career, he's hitting .153/.191/.212.

Oh, and he has a home run. That swing up there is the followthrough on his home-run swing. It was just about the longest home run I've ever seen a pitcher hit. The odds are at least decent that I'll have a grandchild the next time a pitcher hits a ball that far in AT&T Park.

Over the past three weeks, opposing pitchers have hit about four percent of the total home runs the Giants have allowed to pitchers since moving to San Francisco. That's a sentence to read twice if you have the time. There are some seasons in which the Giants don't allow a home run to a pitcher at all. From 2008 through 2011, the Giants allowed just a single home run to Yovani Gallardo. In the first three weeks of 2013, the Giants have allowed three home runs to starting pitchers.

Is this some sort of record? Are they close to some kind of record?

They are, at least for the San Francisco era.

There are five months to work on history, fellas. Go get 'em. Or, rather, please, no, don't. Again, there's nothing you can do about pitcher home runs. It's not like Ryan Vogelsong or George Kontos should nibble when they face pitchers. If a pitcher throws strikes, the odds are overwhelmingly great that they'll get the opposing pitcher out. Giving up a homer to another pitcher is like flagging a taxi down and getting a drunk camel for a driver. That doesn't mean you should flag down taxis differently. It just means, like, whoa. That happened.

It is almost certainly annoying. It's a little slice of calvinball in your normally scheduled baseball game, and you're never expecting it. But what are you gonna do?

The Giants are a pitcher home run away from tying the San Francisco record, and two away from breaking it. Now you know.

And because I can, the list of every pitcher home run hit against the Giants. If you want to blow your mind, click on the Craig Leffterts one from 1986 and read the game log. That's probably one ripe for an offseason feature in a few months. This place would have slid into the sea.