Tim Lincecum delivers his first great start of the 2013 campaign and the Giants win their third series of the season against a division opponent.

Consistency is one of those words that gets thrown around to the point that it loses all meaning. "He needs to be more consistent", "consistency counts", "I'm afraid, Lord Crawley, that he is insistent that you be consistent"...

So when the recent worries and criticisms of Tim Lincecum essentially boiled down to "the stuff is there, but his release point is inconsistent" I worried that the focal point would become just that: consistency. Because let's face it: Tim Lincecum is getting older. While using his body like a whip or a hinge or widget looks great and has led to a lot of success for him, even he is not immune to the ravages of time. All of us get old, lose flexibility and even lose our balance. Balance, especially, must be pretty important for maintaining that delivery of his.

I wanted to write this whole part about how humans start to lose balance as they approach 30 because a doctor told me that one time. I couldn't find any good articles to backup my point (and now I think that doctor wasn't a great doctor), so I didn't want to just put something out their like an "old wives' tale" or throw another piece of speculative kindling onto the "What's the matta with Timmy?" fire. So, instead I'll just say that as we approach 30 our bodies definitely start to perform less and less "young". That's a young man's pitching motion, don't you think? It requires quickness and, as I've already said and you already know, flexibility.

Wow, this sounds like a eulogy when it couldn't be further from the truth. Tim Lincecum remains a good pitcher. He was a great pitcher tonight. The Giants won the game in classic AT&T Park fashion. EVERYTHING IS FINE AND GREAT.

It looked like Tim and Buster had a pretty standard game plan tonight. If you'll allow me to present the results of my amateur (read: uninformed and terrible) scouting... it appears that they wanted to stay up and away with the fastball and down and in with soft stuff to lefties. 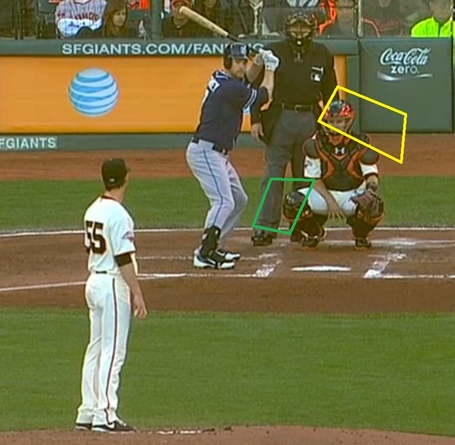 That's where it looked like he was throwing most of his pitches, even to righties that was the general idea. And he was doing it with a fastball that was anywhere between 89-91. Hardly electric stuff, but spotted well and spotted consistently. And because he used it consistently the Padres couldn't sit on breaking balls and splangeups. Also, they're the Padres and their ability to hit is still mostly suspect, especially when Carlos "Bonecrusher" Quentin is out of the lineup. I suspect that THE SHADOWS (due to the odd start time) might've helped out both pitchers for the first couple of innings, too, which might've helped both of them settle in quickly as they could gain confidence from hitters flummoxed by the hitting backdrop.

BUT STILL! The point remains that Tim Lincecum had 8 strikeouts and only 2 walks and was able to pitch out of a jam not entirely of his own creation in the third. That was really nice to see. If he can keep the walks down and continue to use that fastball more often -- even if it gets hit hard; that's the thing, he can't shy away from it -- then I've no doubt that he won't be embarrassing to watch this season. It sounds like everyone in baseball has been saying that exact thing for over a year now.

This was the first game in which Tim Lincecum threw 6.1 innings since September 18 vs. Colorado. Tonight was the first time Buster Posey caught a Lincecum start since August 15 vs. Washington. Those things don't really go together, of course, but they were both worth pointing out, I think.

It's one game, so, it doesn't really make much sense to say that the personal catcher arrangement Lincecum has with Bochy for Hector Sanchez should be tossed out the window, but I will say that the speculation about Tim Lincecum's success in the postseason might also be true of why working with Posey could lead to more (sigh) consistency for Lincecum. In short: he's on his toes. He's *un*comfortable. Maybe it's discomfort that brings out the best in Lincecum. Maybe a little anxiety causes him to focus more on the task at hand. Extreme weather is a physical thing, so, I don't lump "Tim can't pitch in the heat!" with this psychobabble. I'm not even sure the psychobabble stuff makes sense, but there was something to Tim not having time to think about his next start and just getting thrown into the middle of a game that might've brought out an edge in him that he needed to compensate for diminished skills.

Tim Lincecum has always been considered unconventional, from his personality to his pitching motion. The conventional wisdom is that pitchers rely on routine and certainty to bring out the best in them. Maybe Lincecum works in reverse.

I'll never get tired of Pablo Sandoval at bats. I've just decided to enjoy them all, even when they're over in 3 pitches or less. His battle with Cashner before hitting the home run was exciting. The home run itself was exciting (I love, love, LOVE when the ball clanks off the green metal facing on the right field wall). He swings at e-ver-y-thing. Pablo Sandoval is a great player. Pablo Sandoval is a great player because he swings at e-ver-y-thing. He, too, is unconventional.