Here's a video of the Giants in 1958, their first year in San Francisco. I was going to post it because it was shot in Seals Stadium, which I'm kind of fascinated with. Nothing too exciting. Certainly important enough for Very Important Theatre, but nothing you'd want to share with your Facebook friends, really. For baseball nerds only.

Then, after a couple of views, it struck me.

I mean, not exactly like Pence. But the stances and loading mechanisms are pretty close. That's Daryl Spencer. He was known as "Big Dee" according to Baseball Reference, probably because he was 6'2" and 185 pounds. I mean, jeez, mix in a salad, Daryl. And he kind of swung like Hunter Pence.

Even the Say Hey Kid had a little Pence in his stance. Just a smidgen, at least from the side.

Conclusion: We've been joking about Pence being an arachnid or alien, and it was good for a few yuks. I've been secretly worried that we were running the joke into the ground. But here's a new take: time traveler. He's not from our time. Was he normal in his time? Did the traveling change him? What did he have to do? What did he sacrifice to come here? Soviets? Are the Soviets involved?

Time traveler. He might be from the future or from the past, but he learned to play baseball in the '50s. 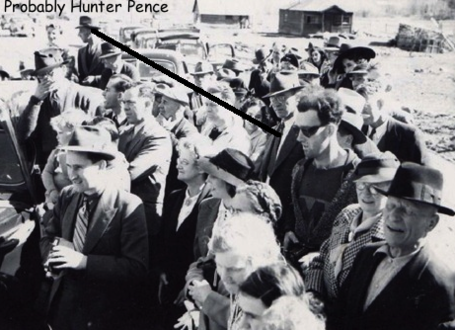 If we're going by Occam's Razor, this makes the most sense so far. Time traveler. He was sent here to hit the ball three times with one swing, and now he's trapped in our time. I didn't think I could respect and fear him more, but here we are.