Share All sharing options for: Giants take opener, down Padres with walk-off win

When Madison Bumgarner gets this kind of strike zone, he's a menace:

That's from the catcher's perspective, and you're looking for the red squares. Those are the called strikes, and you can see a few just outside the zone. It wasn't an egregious strike zone. It wasn't Angel Hernandez bad. It was, as Mike Krukow predicted in the first inning, a good pitcher's zone.

About the slutter/fastball/slider combo. Here's what Brooks Baseball had for Bumgarner's pitch-by-pitch breakdown of the hard stuff:

Those classifications aren't hand-written by some dude with a center-field camera trained at Posey's junk as he decodes all the signs Posey is giving. They're the best guess of an algorithm built to decipher pitches. If a pitch has a certain movement down and away, it's probably a slider. If a pitch breaks down sharply at 73 m.p.h., it's probably a curveball. That kind of thing. So the pitches classified as two-seamers might be four-seamers, which might be sliders, which might be two-seamers.

Which is the point. There just isn't that much difference between Bumgarner's slutter and slider, and it has to be murder to hit against. I think I mention Al Leiter as a comparison once a year because that guy really messed with the Giants' heads back in the late '90s. Except here's the difference: Leiter holds the record for consecutive games with a walk. From just before the strike in '94 to October of '99, Leiter walked a batter in every game in which he appeared.

Bumgarner has the slutter that bores in on the hands, and he has the slider that breaks a little more. But he also has the control and command to browbeat hitters into giving up. One of these days -- when he's a wily, grizzled veteran of 25 or 26 -- he'll get even trickier with that command, peppering the outside of the strike zone at will just a little bit more.

Until then, he's still, you know, one of the best pitchers in baseball.

As someone who grew up with the comedy stylings of Frank Rizzo, I know how to appreciate a Jerko. And the Padres have a player named Jerko.

Kind of surprised the family kept that pronunciation. Really, if you wanted to, you could pronounce it GorGOORian, claim it qualifies under the Mike Krzyzewski rule, and live out the rest of your life. Instead, we get a Jerko.

Which is fine. It was just distracting all game, that's all. Wasn't expecting it.

1. Kontos throwing 92 with a slider that bit straight down. That's the difference between pretty-okay-middle-reliever Kontos and holy-crap-I-just-woke-up-and-this-guy's-the-closer Kontos. Not that the Giants are looking for a closer. But Kontos at 89 with a slider that alternates between wipeout and okay: Good guy to have in the bullpen. Kontos at 92 with a consistent slider: goodness me.

2. Santiago Casilla was his regular self, making a few good pitches and a few bad pitches, but more good pitches than bad. In the ninth inning, with Chase Headley at the plate, it would have been a real opportune time to throw a complete meatball of a pitch to give the lead up. It felt like it was coming -- Headley batting from the left side for the first time, looking for a hanging slider.

Instead, Headley got a 92-m.p.h. fastball that broke like a changeup. The PITCHf/x for that pitch: 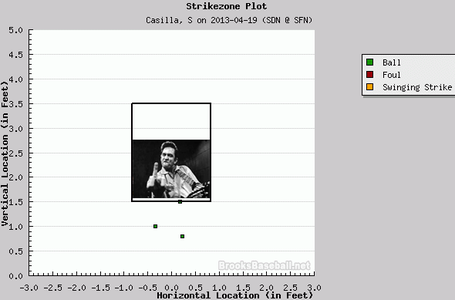 Yep, yep. It was, to this point, my favorite pitch of the year. I was expecting bad things. I wasn't expecting that pitch from Casilla. Even better: neither was Headley.

The lineup in the last game of the regular season in 2010:

In the bottom of the ninth, the Giants were lucky enough to have Gregor Blanco eckstein a hit in front of a Padres left fielder (doesn't matter which one). Then Torres muffed the bunt attempt, but he was fast enough to steal the base right back. Then Angel Pagan got the game-winner because he's the greatest.

Long story short: The Giants are a heckuva lot faster this year than they were three seasons ago.

Addendum to that story: Didn't seem to hurt them in 2010. Still, it was neat to watch in the ninth tonight.