SB Nation writer develops acute headlinitis and goes for a pun because the Giants 4-3 loss to the Brewers was, ultimately, not very fun.

Spinning the "Wheel O' Recaps" can be a harrowing experience. Sure, you could land on "Perfect Game!" or "No Hitter!", but there's also "Victorino A Hero" and "Dodgers Win" threatening to rain on a writer's post-game writing parade. Well, tonight I landed on "Milwaukee Walk-off"... which feels like something that happens to the Giants in Milwaukee every year. It doesn't (the last time was in 2011), it just feels that way. And walk-offs stink every time they're against the Giants, no matter where they take place. Heck, losing stinks. All the time. Stinks so much. So much stinky stink.

I'm no Grant and I'm no scout and I'm no flesh-encased speed gun, but it looks like Santiago Casilla has lost some fast on his fastball. If you want data to back this up like charts and graphs, then go to diarrheazoo.com or something (wait -- you probably should not visit that site). I can't really figure out how to synthesize raw data with opinion sometimes, and this is one of those cases. 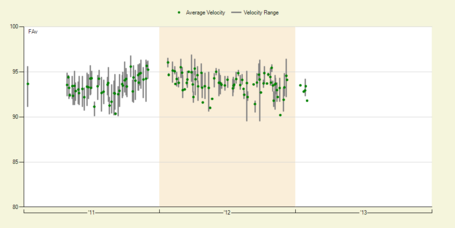 So, yeah. In 8 games and 8 innings, his average fastball velocity has been lower from the start than the previous two seasons. He might've made it to 93 tonight. What does any of this mean? Well, I put a lot of stock in having power arms in the back of a bullpen. Guys who can come in and fire fastballs by hitters. A 97 mph fastball can make up for erratic control. A 97 mph fastball makes up for a lot of things. So, when a pitcher doesn't have that he loses his correction tape or blemish concealer. What's left are ugly typos and visible pock marks. Pretty cool how Blake Lalli drove that pitch nearly to the warning track of the opposite field.

Blake Lalli. Looks like Ron Roenicke picked the right time to unwrap him.

Buster Posey is as bad as a Jean Machi butt cheek sneak right now. The Giants have done just fine without much help from him offensively, and it'd certainly be nice if he could start hitting along with the rest of the team, but that's how a regular season goes. The 1-8 of the batting order (or 1-9 if you like your baseball spoon fed) rarely operates on the same level. It's like looking at the audio levels on a professional studio sound board. Some are up, some are down, you have no idea what those blinking lights do, or what most of those numbers mean, and you just know people get freaky on top of it after recording sessions.

All of this to say that Buster Posey is really bad at the plate right now and that's okay. It's going to happen.

On the other hand, there's nothing wrong with the way Buster Posey handles his business in front of the plate.

Masculinity or just overall toughness isn't measured by one's willingness to block home plate without the baseball. It's just not. I'd argue that doing your job to the point that it stops you from doing your job in the future is something you should not do while on the job because it is obviously not a part of your job.

The coliseum crowd mentality of wanting to see bloodsports and death is the lowest form of humanity. It's sickening. It doesn't make sense to claim you're a fan of a beautiful game but demand that it be as ugly as possible. Not making sense is human, too, but it's also the easiest form of expression for people to ignore or outright disrespect. And I don't have much respect for people who demand home plate collisions. Okay, fine. I have no respect for them.

Whoa. That was sanctimonious. Sorry about that. I guess "Buster Posey criticism" is a button of mine.

One day we'll remember Yuniesky Betancourt only as a punchline...

Via @kyleashauer, teams are now 0-9 all time in games in which they have intentionally walked Yuniesky Betancourt

I mean, we talk about Betancourt like he's Jerry Gergich right now, while he's still an active player. And yet he insists. He insists upon himself.

(Also, just for thoroughness: the referenced tweet gives credit to someone who got the note from this article.)

Oh. You probably don't get that reference. Allow me:

Back in high school, all the math teachers were weirdos. One of them ate chalk, one of them was this R. Lee Ermey-esque P.E. teacher but also a geometry teacher, and one of them would shut the windows and the doors and turn the thermostat up to 90 whenever someone would fart in class. I don't know why he chose to torture the students this way and I still don't know for sure if farts thrive on heat, but there you go. There's the reference.

- Brandon Crawford started the comeback rally tonight. Brandon Crawford made a critical error in the bottom of the ninth that fueled Milwaukee's game-winning rally tonight. That stinks. He doesn't stink. That was really, really unfortunate. It was not a smart play. Still, I think he just earns one quick open-air Machi fart for that one.

Fans and pundits dismiss Ryan Vogelsong at their peril. I'm not one of those people waiting for a crash. I genuinely believe it's possible for us to change our mindset and affective positive change in our lives. I know that sounds very hippie-like and unquantifiable emotional balderdash, but it makes sense.

If his physical ability remains, why can't a mental adjustment be the key to his success? Do better. Be smarter. The goal is to improve as we get older. Well, here's an example of that.

Losing stinks, though. This was just lighting a match.