Share All sharing options for: Zito clobbered, Giants can't catch up to Brewers

At some point in 2009 or 2011, you watched a Giants/Padres game. The final score was 1-0, and one of those teams scored only because they had a punchcard that gave them a free run for every nine they had over the previous month. It doesn't matter who scored or won. It wasn't a pitcher's duel; it was an offensive stalemate. It was boring.

You had birthday candles to blow out, and I had a dandelion. Someone else had a dime and a fountain, and yet someone else was on Coney Island with a Zoltar machine. At the same time, all of us wished for a team that was imbalanced in the other direction -- a team that was all-hit, no-pitch. Just to mix it up, you know?

Not going to lie. It's less annoying. For now. It's going to get old if it keeps up, but there's a welcome change that comes with watching the Giants down big early and thinking, eh, they still have a shot. Maybe it's early-season samples messing with our minds, and they'll be the same old team after all. But this is the fifth time the Giants have scored seven runs or more this season. Here's when the Giants had their fifth game with seven or more runs in previous seasons:

If it feels like a team that can hit, that's because it is. For now. They have bigger innings than we're used to, and they can actually get runners in with two outs, which isn't really a skill you can count on. But that's better than a skill you can't count on, which is what it was in 2011 and the first half of last year. 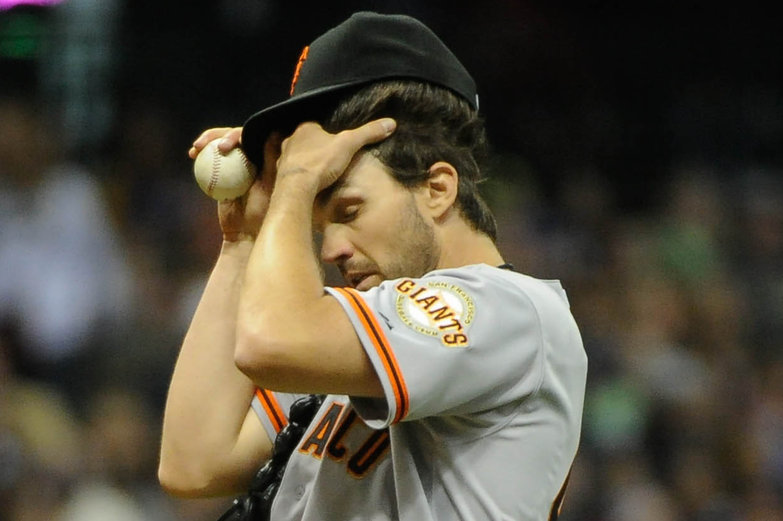 Right, right. The loss. The last time Zito gave up more runs, Brandon Medders, Merkin Valdez, and Bob Howry relieved him. Which is to say, even by bad-Zito standards, this was exceptionally bad Zito. Turns out his velocity was in the low-to-mid 80s, and his command was off. That's kind of the free space in the middle of your Zito bingo card, so don't worry about marking anything down. He'll have these games; if they're every third game, everything will be just fine, especially if the Giants really can hit a bit.

If you go to Baseball Reference before midnight, though, you can still see the bold and italicized ERA on Zito's page that indicates that he's the league leader in that category. Winning percentage and home runs allowed, too! I have such fond memories of four hours ago. It was like a different world.

I, for one, totally thought Barry Zito was a much better pitcher now, and now we have to face a harsh reality. Turns out that Zito is Zito is Zito.

An incomplete list of balls I thought were going to drop for hits or go over the fence:

That's not to say the Giants were completely unlucky, as they benefitted from a couple weak hits and defensive miscues, but that's a game's worth of hard-hit balls most of the time. A lot of those came with runners on base. There have been more frustrating losses, but you'll have to go back to 2012 to find them. Or Friday. But also 2012.

One of the reasons the offense looks jim dandy is that Brandon Crawford looks like a quality hitter. Well, sure, if you told Giants he'd hit like an All-Star, everyone would have been even more optimistic about the lineup. Considering that he's still playing Gold Glove defense and that All-Star voting is going to open up in, like, two days, there's a chance that the nutty Giants voting machine is going to kick into gear for him.

He'll have to get past a healthy Troy Tulowitzki and Starlin Castro, so it's still a long shot, but Crawford has a chance to be the first left-handed All-Star shortstop since Tony Womack.

Also, Tony Womack was on an All-Star team. So maybe we shouldn't be all that impressed. But if you gave me the Zoltar machine before this season and told me to wish for one player-related development, Crawford turning into an average hitter might have been it. Just an average hitter. We're talking .260/.330/.400 -- nothing greedy. Except that would mean Crawford would be one of the best shortstops in the game, so I guess it's a little greedy.

It's looking good over the first two weeks, at least.