A copy of this Norman Rockwell painting hung in my room when I was growing up: I didn't get it. I wasn't really baseball-obsessive until college, and that's when my parents redid the room and got the smell out, which meant that painting was just background noise to me. I never had an a-ha epiphany about why it made sense for Rockwell to make the Cubs his subject in that painting.

I think I get it now.

Right now, there is a scientist in a lab mixing different balks a variety of test tubes. He's heating pickoffs in a Bunsen burner and recording the results. He's shooting wild pitches with gamma rays, hoping for a mutation. This person is an employee of the Chicago Cubs, and he's good at his job. Because bad like this doesn't happen without innovation. A team has to be on the cutting edge of bad. The Cubs are quite possibly America's most forward-thinking enterprise right now, really. They're just producing something no one's really asking for.

The go-ahead run for the Giants in the 10th scored on a balk. But it wasn't just any balk -- a twitch of the glove, or not coming set. This was performance art. Shawn Camp jumped in the air and faked a throw to first. It was like something you would do with your keys to scare away an advancing raccoon. Except Camp was a major-league pitcher with a runner on third base. He should not have done that.

The Giants took a temporary lead in the sixth because the Cubs were the first team in history to have five wild pitches in an inning. Look at the game log: 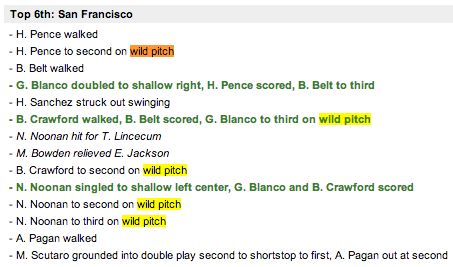 A list of things the Giants did well that inning:

1. Not chase pitches
2. Hit a single and a double

That led to four runs. We have to tread a fine line, here, because for years most of us have railed on the team for being impatient and not taking a lot of walks. Here they are, taking all sorts of walks, yet the temptation is to assign blame to the other team rather than credit the Giants for being patient. The temptation is strong because that was literally one of the wildest innings in baseball history

Suppose both can be true. The Giants might be selective, and the Cubs are most certainly a wretched baseball team right now. (I wasn't that down on them to start the season! I don't know if this will continue for the Cubs, or if we just watched anomalously wretched baseball that will soon morph into merely bad baseball.)

The Giants will have a game soon where they're trailing big early, and they won't win. And we'll throw our hands up and shout, "Hey, what in the hell is that?" Same thing goes with entering the ninth inning down by a run. Eventually the Giants won't take the lead. It will be a gut punch because it's certainly the kind of baseball you can get used to.

The baseball isn't always going to be this bad, so the Giants can't count on it. But when another team started to test the chemical boundaries of bad, at least the Giants were opportunistic enough to come away with three wins in a four-game series. Still not sure how this all happened.

With that in mind, let's all raise our glasses and toast Pence for the at-bats he had today. Even before the ninth-inning, two strike homer, his approach deserved to be covered because of his earlier at-bats. He hit a two-strike pitch for a single in the first, and he worked a walk in the sixth after getting down 1-2. Dioner Navarro -- who is apparently a writer trying to write the baseball version of Paper Lion -- didn't call for anything other than a fastball with two strikes and Pence at the plate. Which … huh.

The two-strike slider that Camp threw in the ninth might have been the worst pitch I've seen all season. And I've watched Tim Lincecum starts, people. In the Spanish Elite League, there's a team called El Llano. They finished 1-35 on the season, with a .164 team average and a 11.84 team ERA. I had a hard time fathoming that. Now, though, I have a template: When El Llano pitches, they're throwing the same pitch Camp threw Pence, over and over and over. When they hit, they're like players who would swing through that slider.

You've read a lot of these post-game threads over the years. How many of them have devoted this many words to the failures of the other team? Not many. This might be a record. But the Cubs in this series were like the time my best friend threw up all over himself at my engagement party. There's bad, and then there's the kind of bad you don't even need hindsight to appreciate. It's special, and you know it immediately.

Credit Pence, though, for hitting the snot out of that ball. It's one thing to get the bad pitches. It's another to do something with them. And if the Giants are hoping to be a productive offense, Pence is going to be a big part of that. So far, so good. 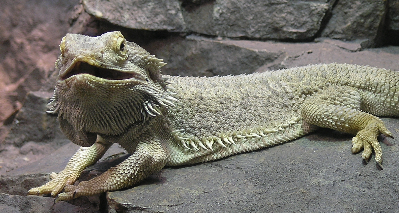 For comparison, this is from today (by way of USA Today Sports Images):

Mm-hmm. Mmm-hmmm. That'll work. If Pence wants to be The Bearded Dragon, I'll work up some foam hats.

Soooooo, this was a Tim Lincecum outing. He had one walk! That's all I'll focus on. I don't even know what happened in the rest of the game.

Okay, so the first inning was filled with dingers. I wonder if the Cubs messed with Nate Schierholtz's first home-run ball before they gave it to him as a keepsake.

And when Lincecum has an unfortunate outing, like he did on Sunday, instead of searching for a rational explanation, let's just make something up. I'm tired of explaining what's going on because I have no idea what's going on. Dave Righetti knows more about pitching than every registered member of this site put together, yet he doesn't know what's going on. So I'm making something up from now on.

It's the slider, man. Lincecum can't control his slider, and he hangs them too often. When he won his Cy Youngs? He didn't even throw a slider. Now he has one, and it's sapping his velocity and becoming a hit-me pitch. He has to junk the slider.

(But it's probably the slider.)

The important part is that the Giants won three of four, so this is just more nitpicking. It'll be fun to keep track off all season, though.