The Giants had their biggest comeback since 2008, beating the Cubs 7-6 to keep their winning streak alive.

This is the kind of game that announcers like to describe one that "good teams win." As in, when a downtrodden, 100-loss kind of team makes a James Michener book full of mistakes, the good teams find a way to persevere and win.

But that sells short just how ugly the game was. That was a game that any team wins. Any team. Good, bad, ugly. That was standing around, stunned, while the clumsy French waiter runs around with a pot of boiling water on his head and a lobster hanging from each nipple. Any team at all would have accepted that gift. The 2008 Giants. The 1899 Cleveland Spiders. A team of you and your friends. Because it was handed to them. Starlin Castro was worth exactly 0.0 wins above replacement before this game, according to Baseball Reference. He's now it -1.0.

Before you chide me for rehashing an old joke: I'm not sure if I'm kidding.

Make up an acronym for this game, put it on a bracelet, and refer to it the next time the Giants lose a tough one -- the kind of game where they hit three balls hard every inning but don't score. Because the Giants didn't exactly earn this game. Nick Noonan and Angel Pagan hit the ball well, Pablo Sandoval had a great two-strike swing, and team worked out walks when the Cubs' pitching was wild, so maybe it's a little too heavy-handed to suggest it was a game the Cubs forfeited.

But when Ryan Vogelsong hits for himself with two runners on, down by five in the fourth inning … it's impossible to say the Giants deserved to win. It's not like Bruce Bochy was conceding the game by sending Vogelsong up, but it was an acknowledgment that the risk of running through the bullpen on the first day of a road trip was greater than the potential reward that a pinch-hitter would provide in a two-out situation. I disagreed at the time, but not fiercely. There was value in the extra three innings Vogelsong threw, even if the Giants didn't come back.

That kind of decision might be good for the week-long fortunes of a team on a road trip, but it shouldn't be rewarded with a four-run, two-out rally. The Giants acknowledged they didn't want the runs; they wanted a fresh bullpen. The Cubs chased after the Giants in the parking lot and banged on their window, screaming "YOU FORGOT THESE. EXCUSE ME YOU DROPPED THESE RUNS. YOU FORGOT THESE." The Giants rolled down the window and politely thanked them. What else were they supposed to do?

In that fourth inning, the Giants had three good at-bats, which led to two singles and a double. Somehow that turned into four runs. And in the fifth inning, Vogelsong came up again, this time with one out and the bases loaded, and the Giants somehow turned that into a three-run inning.

I'm not sure if that's the kind of game that good teams win. I think it's the kind that bad teams lose. And I hesitate to proclaim that just about any team is irredeemably awful after a week of baseball. But, boy, were the Cubs bad on Thursday. The Giants weren't exactly good. The Cubs were still much worse.

All that preseason stuff seems funny now. Will Tim Lincecum be back? Barry Zito isn't really as good he was against the Cardinals and Tigers, so what should we expect? Madison Bumgarner looked like he was running on fumes by the end of the season, so is he going to be the same? Oh, there were questions in the rotation. Still are. But the one guy that I didn't really think too much about was the 35-year-old who was playing for the Sioux Falls Persnickities at this time three years ago. He's going to be fine, I figured.

It takes two starts to remember that he came from a mysterious doorway in the back of an AT&T Park closet, and that he can go through that same doorway just as quickly.

Of course, it's too early to worry about anyone right now. Remember who Giants fans were worried about last year at this time? Angel Pagan. He couldn't buy a hit. Meanwhile, in New York, Andres Torres looked like he was the 2010 version. There was wailing and moaning, not necessarily in that order.

But if baseball is weird, and pitchers are especially weird, I'm not sure why Vogelsong got a pass when it came to picking the starters worth worrying about. Probably because he's the gruff-but-endearing sergeant from a WWII movie, and we've seen him escape from a prison camp in two different movies before this one.

Just a reminder that Vogelsong probably has more red flags than we ding him for. Of course, he'll beat you to death with an enchilada and a cutter if you say that to his face. So just be honest, and remind yourself he'll probably be fine.

Nate Schierholtz almost impaled Jeremy Affeldt with two consecutive broken bats. It was like something from a Final Destination movie, and now shards and splinters are going to follow Affeldt wherever he goes because he "cheated maple's design."

That's not how Affeldt would get injured on a play like that, though. If the bat pierced the rosin bag, and the dust got in Affeldt's eye and caused an infection … now that's how Affledt would get injured. Or if the bat flew into a seagull, whose corpse made Affeldt slip and fall on his shoulder.

Affledt's not going to let a measly bat get him.

Right about here, I figured it was going to be an inside-the-park home run, if not a five-bagger: 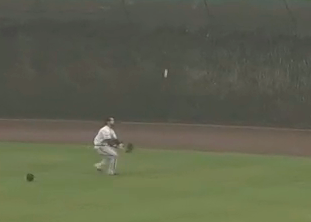 Instead, it was a heckuva catch. The Cubs hit the ball hard today, and they deserved better. Except for all those parts where they deserved to lose.

Still, as sloppy as the game was, it's still worth pointing out that the last strike of the day was probably a ball. After all that, it still might have taken a blown call to win. But when it comes to five-run comebacks, it's hard to get to nitpicky. They'll take it.