Be Like Matt Cain, Earn 51% of the Major League Minimum

A familiar contest returns, offering an unfamiliar lump sum of cash for most people.

MLB 2K13 proudly announces the return of the Perfect Game Challenge. Pitch a perfect game for your favorite team and you could win some serious money, including a top prize of $250,000. Go to facebook.com/mlb2k for details.

I didn’t get to watch Matt Cain’s perfect game as it unfolded. I was tied up in an improv class.

"But Bryan, why waste your time in an improv class? You’re terribly unfunny."

I know. That’s why I’m still upset I missed seeing the first perfect game in Giants history live. I’ve paid my penance by watching the game start to finish a few times now and during this most recent time took the opportunity to jot down some highlights. Your team’s history is important, kids. Pull up a chair or roll up a balance ball or adjust a standing desk... however you read a screen.

First, you can read Grant’s post-game from that night, then you can check out the McCoven’s gleeful overflow thread, and wash it all down with the 50 Awesome Things About Matt Cain’s Perfect Game. That’s just the primer. If you’re like me and didn’t get the chance to experience the thrill of it all live -- and I contend that watching the game knowing the outcome really does affect the experience tremendously -- those are great starting points just to get a flavor of the excitement. Of course, you should also watch the game itself (MLB.tv has it up in its archive and you can also purchase it through iTunes). Finally, check out these other highlights I found during the telecast:

What I learned from this latest viewing is that if there's a platonic ideal of a perfect game, it's Matt Cain's perfect game. I mean, as a Bonds-fearing Giants fan, the only way to do anything is the Giants' way, right? If I were to pick up a controller or add six inches of height and a 94-mph fastball tomorrow, what more would I need to do to pitch a perfect game the Matt Cain way?

Surprisingly, I've given this a lot of thought, and if you'll indulge me a few hundred words more then I'll explain how to pitch perfect like Matt Cain:

BE GOOD AT PITCHING: Just push away everyone you love and everything you care about or anything that takes time away from honing your craft. Lift weights, push buttons, adjust difficulty settings, do whatever it takes to become a good pitcher. This is the first step to being like Matt Cain. This is easy for me. As a writer I have lots of practice pushing away the people who love me, and I'm used to staring at a screen blankly -- I mean, intently -- for hours on end hammering away at one seemingly insignificant thing.

MARRY A PARTNER WITH THE NAME OF A PRESIDENT’S CHILD: Cain's got his Chelsea, now choose yours wisely. You can't copy his because that'd be weird, and you can't marry someone with the name of Sasha or Malia because that's creepy. I'm going to pick Mollie (Mary was the daughter of Grover Cleveland. She was nicknamed Mollie).

HAVE A CHILD THAT VAGUELY RESEMBLES ME: Baby Hartley certainly bears more than a passing resemblance to her Perfect Dad, so if I'm going to come close to following in his footsteps I'm going to need to match him offspring for offspring. Behold, a child that vaguely resembles me: 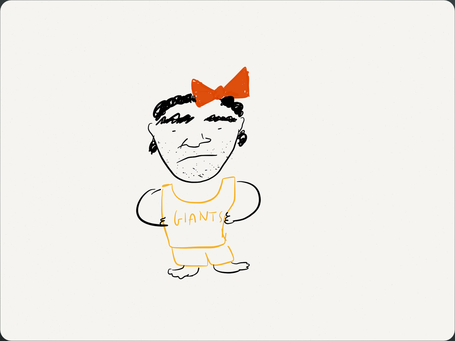 NAME THAT CHILD AFTER A BODY PART THAT BEST DEFINES ME: As a preface, it seems to me that both Mr. & Mrs. Perfect put considerable thought into their child's name and based on what we know of the couple my guess is that they went with a strong human quality that expresses love and compassion. Also, the part of the body that best represented them. So, following that train of thought, the body part that best represents me leads to the only possible name for my Perfect Child: Stomachley.

ESTABLISH SOUTHERN BONAFIDES: Matt Cain is a big, Perfect southern boy. If you or I ever want to pitch a Matt Cain-style perfect game we'll need to establish southern bonafides. Mine are that I've been to both Florida and Georgia, had multiple glasses of sweet tea, ordered a mint julep with a straight face, once kissed a girl from Georgia, and I know 43% of the lyrics to Trisha Yearwood's "She's In Love With The Boy".

I feel that if you become a student of Matt Cain and work to become just like him you will have a better than average shot of earning a monetary reward for pitching a perfect game. Below in the comments, using these categories, how would you try to be like Matt Cain?

For handy copy/paste:
BE GOOD AT PITCHING: (lift weights/lift controller)
PARTNER WITH THE NAME OF A PRESIDENT'S CHILD: (No Chelsea, Sasha, or Malia!)
HAVE A CHILD THAT VAGUELY RESEMBLES YOU: (image!)
NAME THAT CHILD AFTER A BODY PART THAT BEST DEFINES YOU: (preferably with -ley at the end)
ESTABLISH SOUTHERN BONAFIDES: (apparently, Texas is Texas and not the South, so no Texas stuff!)

Now go and try for perfection!