Breaking news (on a geological scale):

As a GIF-making parasite who lives to post partially amusing and occasionally hurtful jabs about Hunter Pence -- and one who has enjoyed two recent championship runs to boot -- I am all for a Pence extension. 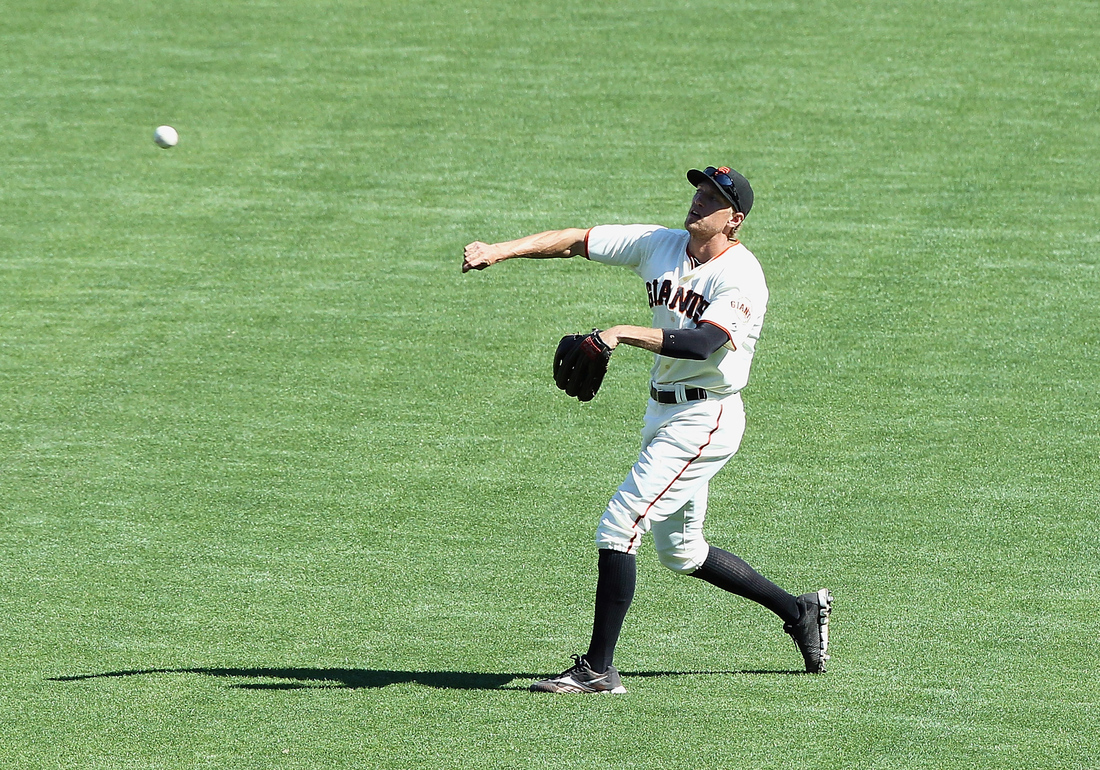 That's a real picture! It makes no sense. Look where his arm is. Now look at how it's pronated. Now look at the ball. Did he shoot it out of his nose? And the best part: It's a strong arm! He actually has a strong, relatively accurate arm. How can you not want to watch this guy for the next three or four years?

But here's the problem: We haven't seen the good Hunter Pence yet. It's a possibility that he's bad now; plenty of players have been sucked into a talent swamp before they turned 30. The Giants already had an aging, expensive outfielder who couldn't touch a slider. We've seen that movie. It was expensive and boring, even if the outcome was good. Kind of like AI, in which the Giants winning the 2010 Series is analogous to Kubrick not having to see how everything turned out. Good decision, Stanley!

Staying with the sci-fi theme, I'm cautiously optimistic about Pence this year. I think the 3,254 at-bats from Pence before he joined the Giants are more predictive than the 219 he had with the Giants. So if he doesn't turn 30 until the season starts, he should hit for a couple more years, at least.

On the other hand, I have a bad feeling for how his mechanics will age. The only unorthodox mechanics that I remember aging well for a hitter was the Moises Alou, an all-wrist hitter. Rowand looked like he was poopin' at the plate, but he used superior athleticism to overcome bad pitch recognition. It worked. For a limited time. When the athleticism took a five-percent cut, his career prospects turned toxic.

Let me check the stats and see if Pence's pitch recogn ... huh, looks like it was pretty bad. Yeah, just had to double-check, but he doesn't have good pitch recognition.

It'll catch up with him, but not just yet. So the Giants' path is simple:

If Pence and his agent are okay with a three-year deal right now -- something that locks Pence up through 2015 before he gets the chance to have a big year -- I'm in.

If Pence is in the middle of a good year before the extension talks start, forget it. He'll be too expensive.

If Pence is looking for longer than three years, forget it.

It's not crazy to engage Pence in extension talks if he's really up for it, but only if he's realistic. Spoiler: He's not realistic. His agent isn't, either. And that's because someone will probably give him big money in this crazy new baseball economy. Looking at you, Colletti, and your hole at third base. So why should he be realistic?

A Hunter Pence deal isn't as nutty as it seems on the surface, but it would behoove Pence to wait. Don't expect anything before the end of the year.