You knew it was happening, but now you have closure. Not closer.

Back before spring training started, there were three legitimate candidates for the last bullpen spot:

Scott Proctor, a right-hander who just spent some time in Korea. His specialties were sinkers and knives, and he was always ready with a wisecrack when things looked bleak.

Ramon Ramirez, a New York kid who'd been here before. His specialties were sliders and explosives, and he was a bit on the quiet side.

Chad Gaudin, a vagabond who could never seem to settle down. He mixed sliders and sinkers together. His other specialties were stealth and hair. He also has a bit of the crazy-eyes.

The spot was won by Gaudin. If you're looking for a neat little tool to play around with, this is a great time waster: Baseball Prospectus's Bullpen (Mis)management Tool. It graphs out all of a reliever's appearances based on the game situation he enters. The higher the number, the higher the leverage. Here's Clay Hensley, for example:

If you're wondering what that spike is, it was Hensley's appearance in that furious A's comeback. That was kind of a ominous game, actually. 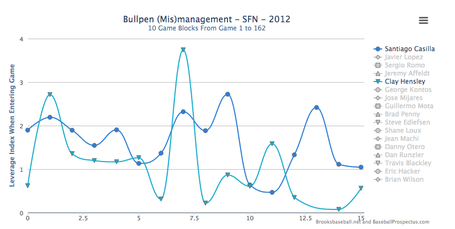 Casilla consistently entered games in dicier situations than Hensley, which is something you'd expect. Why are we talking about Clay Hensley in a Chad Gaudin post? Because, come on, think about that ridiculous beard. Would someone grow that (or the goatee he had before the beard) on purpose? Or is he trying to hide something? Something like the fact that Chad Gaudin is Clay Hensley in disguise.

Think about it. Gaudin has been on eight different teams, but he's never been teammates with Clay Hensley. Hensley was on the Padres in 2008 ... then he mysteriously missed a year because he was "in the minor leagues" ... which is right when Gaudin joined the Padres. Fishy? Fishy. And right when Hensley left the Marlins, Gaudin just happened to show up in Miami. Even the name sounds like an alias, thought up on the spot when questioned intently by a hotel manager.

How could he have been on the Marlins and Giants at the same time? Mirrors.

Which is another way of saying, Gaudin isn't going to see a lot of important, late-inning work. He'll be there to mop, and he'll be there to bridge. If you need him to, he can start. And, who knows, maybe he'll turn into one of those awesome relievers when he gets to his 30s. It happens to guys all the time, and no one's ever doubted Gaudin's stuff.

This has been an expected development for the last couple weeks. Now it's official. Welcome to the bullpen, Chad Gaudin. Your seat is over there. Like, way in the back. He's not a bad guy to have back there.

Battle for the last spot in the bullpen