How will Madison Bumgarner do this year? Will he finally allow a run in the World Series? We investigate.

My favorite quirk on Baseball Reference these days has to do with Madison Bumgarner, whose … wait, hold on, just found a minor-leaguer named Moses Poolaw. That's #1. Let me start over.

My second-favorite quirk on Baseball Reference these days has to do with Madison Bumgarner, whose middle name is K. It's not short for Karl or Kevin or Kennesaw. It's just K. Maybe it would be better if Tim Lincecum or some other strikeout monster had that middle name, but Bumgarner will do just fine. He's struck out 191 batters in each of the last two seasons. If anyone gets to be the badass, Harry S. Truman or Michael J. Fox of strikeouts, it might as well be Bumgarner. The only way it could had been better is if his parents wrote it backwards on the birth certificate.

Madison Bumgarner is that good. Or, was that good. Could be that good again There are a couple of different ways to look at Bumgarner's coming season.

It's easy to forget how young Bumgarner is. This year, he'll be on his fifth Giants team -- as many as Rick Reuschel, Terry Mulholland, Robb Nen, and Dave Burba. So it might seem like Bumgarner's been around forever, but he just turned 23 in August. He's a couple months older than Tim Lincecum when the right-hander debuted with the Giants, for example. A fifth of the prospects on Baseball America's top-100 prospects list are as old or older than Bumgarner.

So while it's not true that pitchers develop on a nice, linear path -- accumulating experience points and constantly improving, like characters in an RPG -- that doesn't mean we should just assume that Bumgarner's hit his ceiling. He could still be getting better. It might not be crazy to suggest that he's likely to get better.

There's no way to bring up Bumgarner's 2012 season without noting the most obvious arbitrary endpoint of all: On August 20, Bumgarner threw eight scoreless innings, struck out 10, and allowed four runners. He also threw 123 pitches, a career high. After that game, his strikeouts went down, his walks went way up, and he couldn't get hitters out. His velocity, steadily increasing all season, suddenly went way down. Here's a velocity chart from FanGraphs, showing Bumgarner's average fastball velocity: 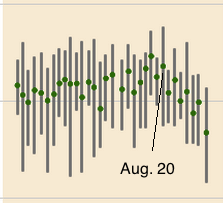 The three gray horizontal lines represent fastball speed: The bottom is 85 m.p.h., the middle is 90, and the top is 95. During the eight-inning, 123-pitch game, Bumgarner was averaging about 92 m.p.h.. By the end of the season, he was in the mid-to-high 80s.

This isn't to suggest that he was hurt, or that the long outing caused some sort of fatigue or mechanical flaw. It could all be a coincidence. But it seems like something that would be more negligent to ignore than it would be to mention. In the middle of August, Bumgarner looked like a fringe Cy Young candidate. In the middle of October, Bumgarner looked like someone who shouldn't be near a playoff rotation. It's stunning how quickly that happened. And whatever was wrong -- physical, mechanical, mental, spiritual, ungual, genual -- it could still be wrong, Game 2 notwithstanding.

It probably isn't. But it could be.

There you have them, the two paths that Bumgarner can take this year.

Option C: He's about the same

Option D: He's a little better or a little worse

Fine, he's either much worse, a little worse, about the same , a little better, or much better. Happy?

I don't see a reason to doubt Bumgarner's ability to straighten things out, though. He went through a rough patch in 2009, and he was still going through it at the start of 2010, getting eaten alive in a couple of early starts for Fresno. He found something in his delivery, corrected it, and improved. Before the World Series start, the scuttlebutt was that he discovered a flaw in his mechanics. He pitched seven shutout innings in that start. I feel comfortable accepting the scuttlebutt as being true.

He's been effective so far this spring (lol spring stats), and considering the ups and downs he's fought through in the past, Bumgarner isn't one of the worries I have with the 2013 Giants, even if he was one of the biggest worries on last year's playoff roster. So cheer up!

There you go. Bullish on Bumgarner, who is unrepentantly bullish on bulls himself, you know.