How will Angel Pagan do for the 2013 San Francisco Giants?

It's Angel Pagan Week here in San Francisco, or at least it should be, so we might as well celebrate the man with a community-projection post. As a reminder, the Giants traded for Pagan in the offseason, won the World Series, then signed the two guys Pagan was traded for in the first place.

You: Hi, I just bought these two hot dogs from the cart out front, and I was wondering if I could exchange them.

Costco: Store credit only without a receipt.

You: No problem. I'll take this flat-screen TV.

You: Also, I'm taking back the hot dogs because I'm hungry.

On the surface, it looked like an even challenge trade. Center fielder coming off a down year for a center fielder coming off a down year. But Pagan didn't turn 30 until halfway through the season. Andres Torres turned 34 a month after the trade. Even after accounting for Torres's defense, it's hard to reject a trade that makes a team four years younger like that. And you know Sabean. Always looking to get younger.

It worked out famously, of course. It's funny what one good year can do to perceptions. Here was the OPS+ trend heading into last year:

That's a less-than-encouraging trend. Considering that Pagan is a career .269/.329/.407 hitter in Triple-A, it was possible -- probable? -- that his 2009 was going to be remembered as an unrepeatable fluke from a hitter who was never that good.

Well, say, that's a different picture. Now it looks like a ceiling and a floor. Sure he could repeat his year, but even if he does that, it's not like he was so bad for a center fielder in his off years. The first sequence up there looks like it would end with him fighting for a roster spot by 2014, and turning into a thumbless Armando Rios by 2015. The second sequence looks like a good player who had a down year in 2011.

Like Marco Scutaro, the odds are fantastic that there will be some pangs of regret in the next four years. Also like Scutaro, the Giants didn't have much of a choice. I wouldn't have wanted them giving up the prospects it took to get Ben Revere or Denard Span, and it's not like the Michael Bourn contract is that much better.

This spring could have been filled with pictures of Shane Victorino in a Giants uniform. What would that look like? 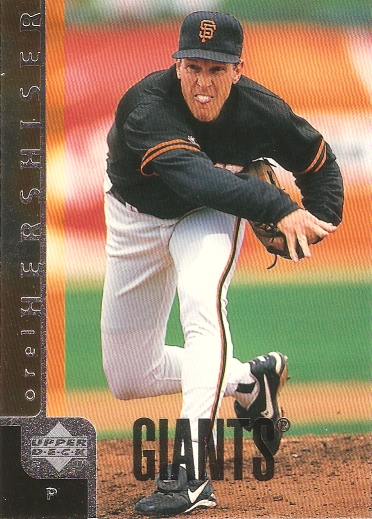 Worse. Well, wait … okay, not sure if anything can look worse than that, at least aesthetically. Cool card, Upper Deck. But Victorino in a Giants uni would be just as scarring. There would be the same mustelid teeth as that Hershisher card, of course, but they'd be more malevolent than Redenbacher. THIS IS WHY YOU ARE GRATEFUL FOR ANGEL PAGAN'S EXISTENCE. Once again, he isn't Shane Victorino, marking the 30th consecutive year that's been true. That's one of the reasons you root for him. That, and ...

… well, I don't know what that is. Ian Miller tipped me off to an amazing picture on the World Baseball Classic's Facebook page, and with just a little text, it becomes hot propaganda. 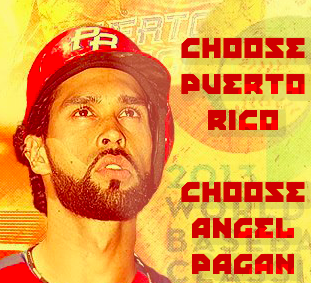 Pulling for Puerto Rico tonight for a few reasons. Angel Pagan is one of them. He is tied for the league-lead in not-Victorino, and he's coming off a championship season in which he set a San Francisco record for triples. And when it comes to the 2013 season, I can't think of a really good reason why we should expect a decline. Since he became a full-time starter in 2009, he's 12th among all outfielders in WAR. He's ahead of Carlos Gonzalez, Justin Upton, and Andre Ethier. He's ahead of Matt Kemp, Carlos Beltran, and Nick Swisher.

You might quibble with WAR, but it's a pretty good hint that over the last four years, Pagan's combination of speed, hitting, and when-he-gets-a-jump defense are a valuable thing to have. Maybe next year's projection is when we start geting pessimistic. For now, though, the oxymoronic success of the Giants center fielder should continue: